Visit the Spots Where “Out of Africa” was Filmed

By stephanieMarch 10, 2017On Location, Travel 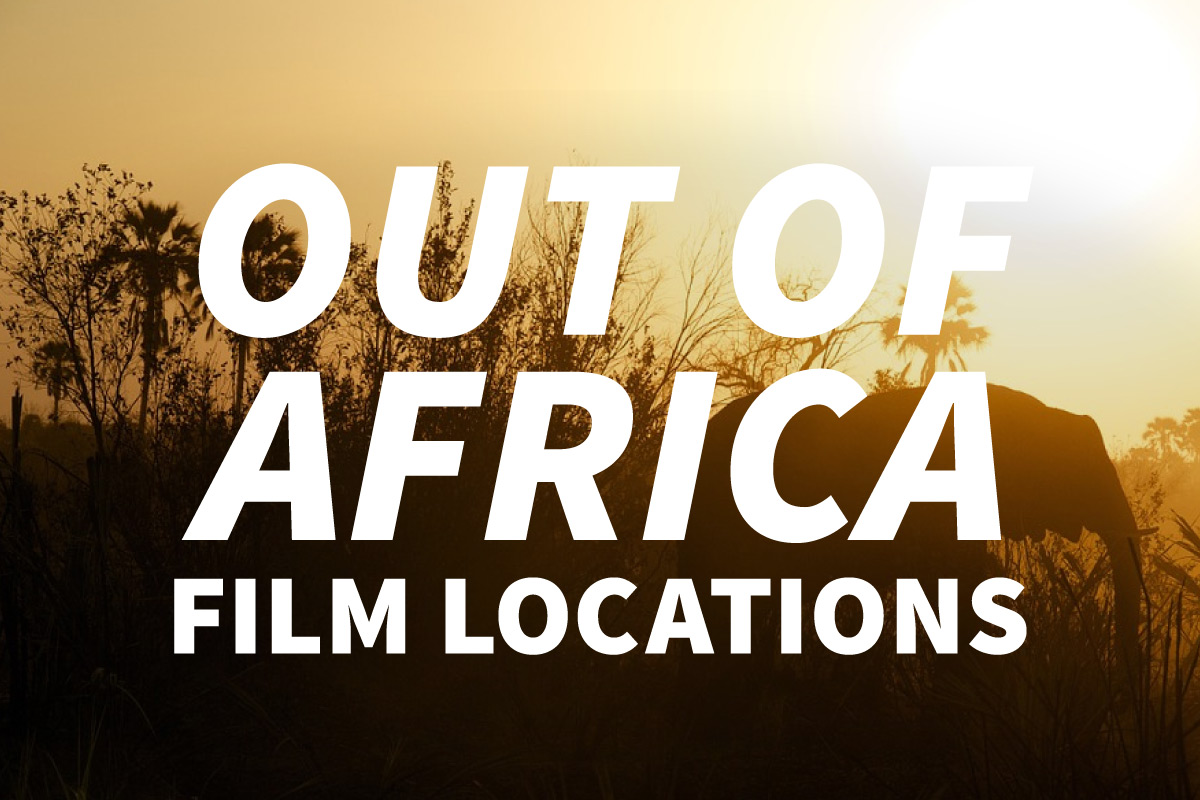 Everyone loves movies. They transport us to a different time and place. They let us dream in a way unlike any other, and let us forget our troubles, even if it’s only for a few hours. Three decades after its release, one of the most iconic films of all time continues to captivate audiences and transport them to one of the most romantic places in the world: Kenya.

Our “On-Location” series focuses on famous film locations around the world that you can visit. Today, our series features film locations from the Academy Award Winning Best Picture: Out of Africa.

Inspiration Behind Out of Africa

Out of Africa is a 1985 film adaptation of the book by the same name. The book was written by Karen Blixen under the pen name Isak Dinesen. Originally published in 1937, the story chronicles the life of the author when she “had a farm in Africa at the foot of the Ngong Hills.” (Before you open Google Maps, the Ngong Hills are located a short distance southwest of Nairobi.)

Born in 1885 in Rungstedlund, Denmark, Blixen came to Africa in 1914 to marry her half cousin Baron Bror von Blixen. They had planned to start a dairy farm near the Ngong Hills. However, her husband decided to start a coffee plantation instead – against the advice of others in the area that the region was not conducive to growing coffee. 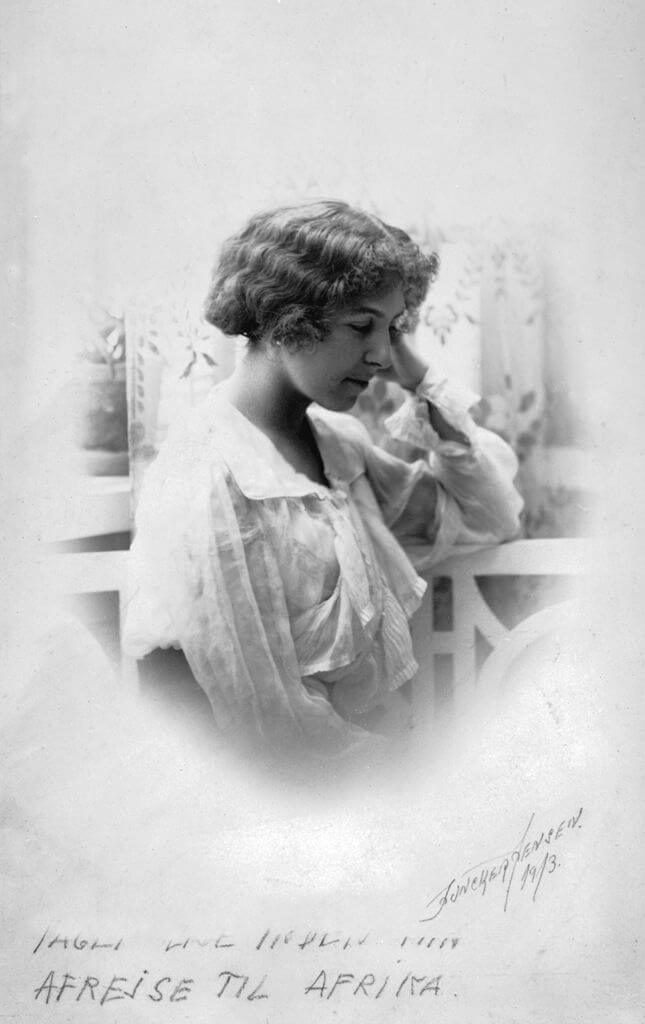 Photograph of Karen Blixen – author of “Out of Africa.” Source: Wikipedia.

There’s more to this story, but in the interest of not spoiling the movie, we won’t say anything more.

Years later, Blixen chronicled her time in colonial East Africa in her books Out of Africa and Shadows on the Grass. 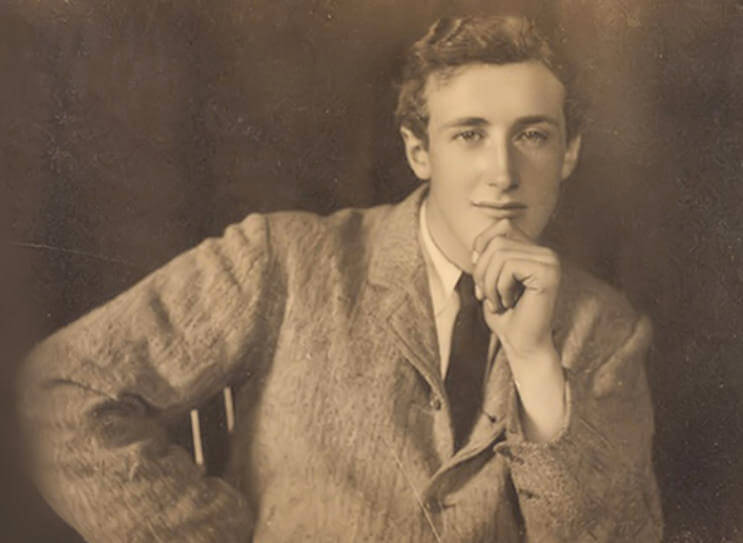 Out of Africa Film Locations

Released in 1985, Out of Africa is an academy award-winning film starring Meryl Streep and Robert Redford. The most striking thing of the film is the breathtaking cinematography. The movie was filmed on-location in Kenya. Thanks to protected parks and reserves, you can visit just about every natural area depicted in the film. 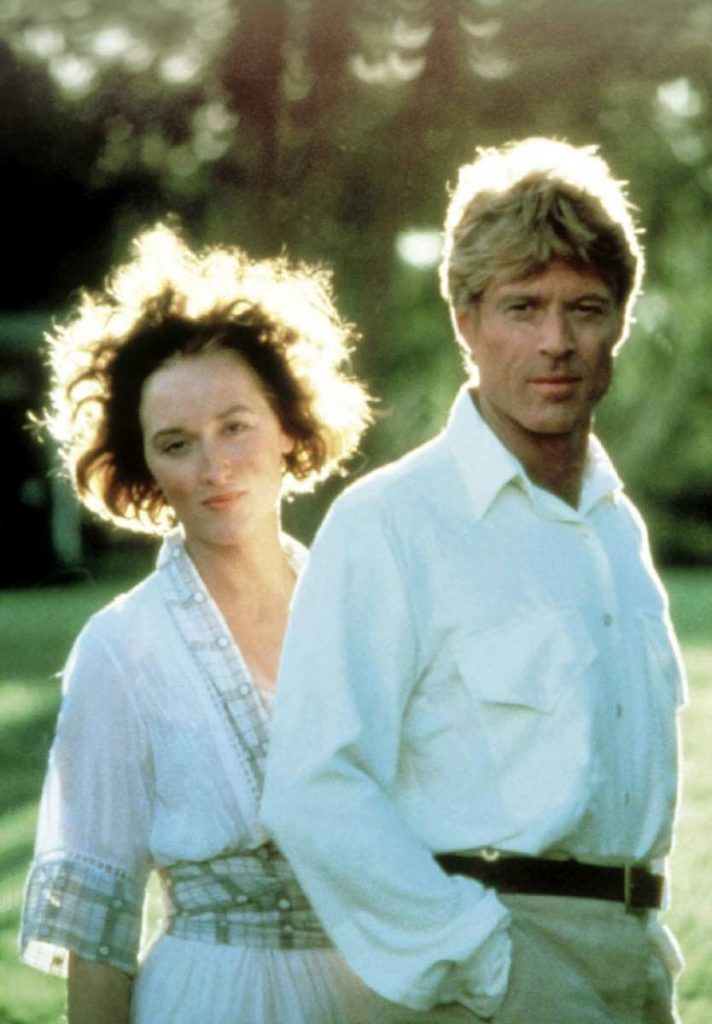 Meryl Streep and Robert Redford in “Out of Africa” as Karen Blixen and Denys Finch Hatton, respectively. Photo: The Red List.

Shaba Reserve is located in central Kenya, north of Nairobi. Here you will find the endangered Grevy’s zebra. It’s also known for its Impala, gazelle, zebras, hyenas, jackals, oryx, Masai Lions, African leopards, and African bush elephants. Many of the outdoor scenes on the savanna were filmed here. 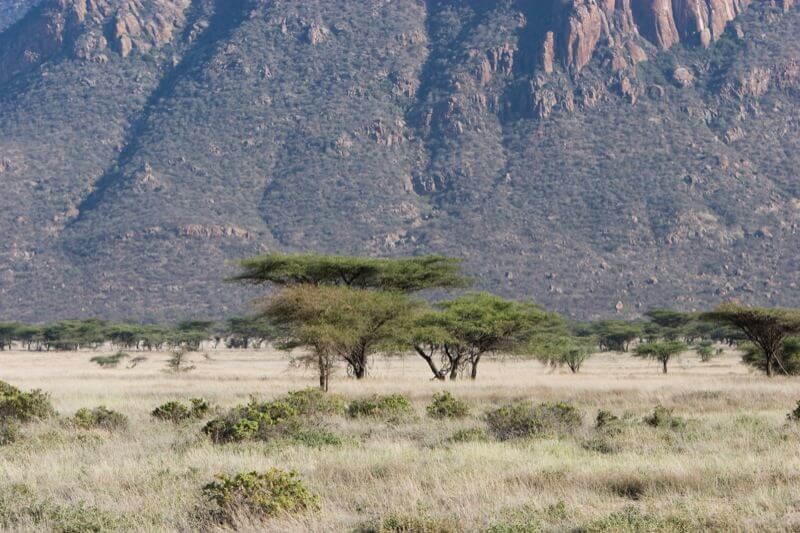 Shaba National Reserve where many of the outdoor scenes were filmed. Photo: Marc Samsom – Flickr. 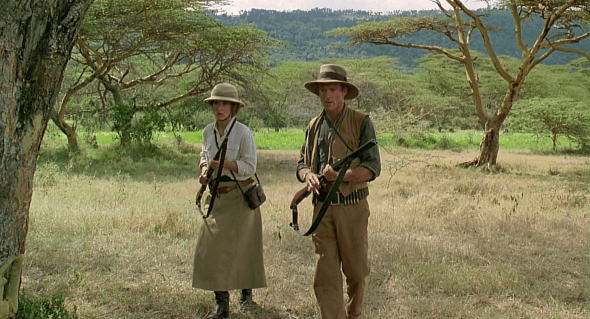 Safari scenes like this were shot in Shaba Reserve. Photo: Classiq.me

This is a special place for fans of the film. It’s where the iconic scene from the movie poster was shot. 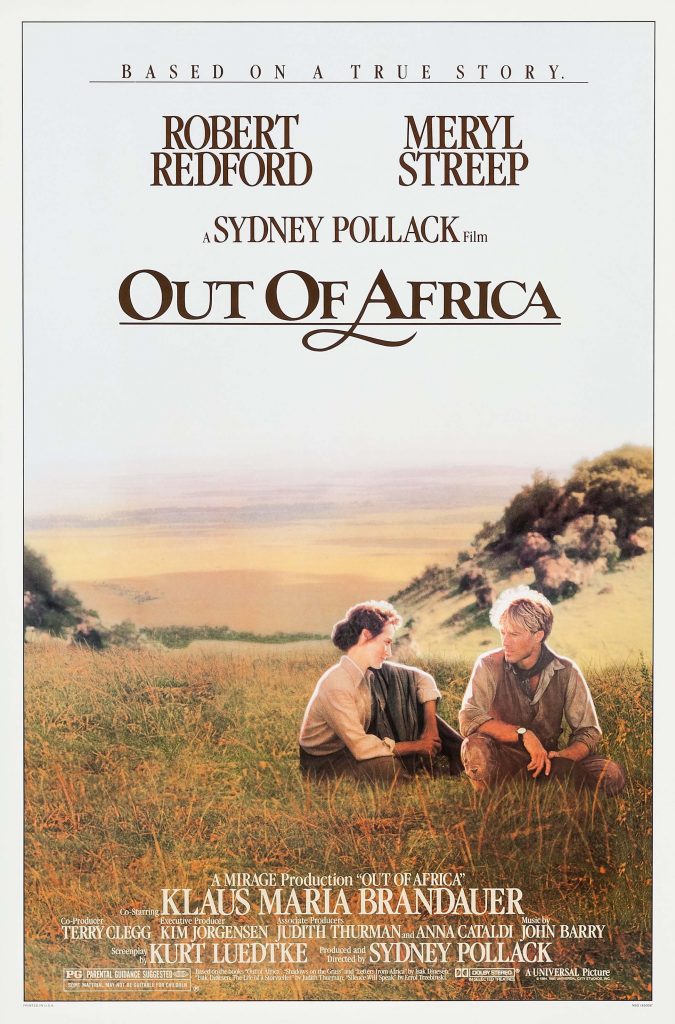 The setting for this shot was in Maasai Mara. Photo: The Red List.

You’ll find it on the Kenya-Tanzania border. Luckily for you, the film’s popularity has driven tourism to the area. Consequently, there’s no shortage of things to experience that recreate the romantic feeling of the film.

For example, you can take a hot air balloon ride over the Mara, as it is called by the locals. There’s also a number of lodges and tented camps available if you really want to experience the safari spirit of the film. 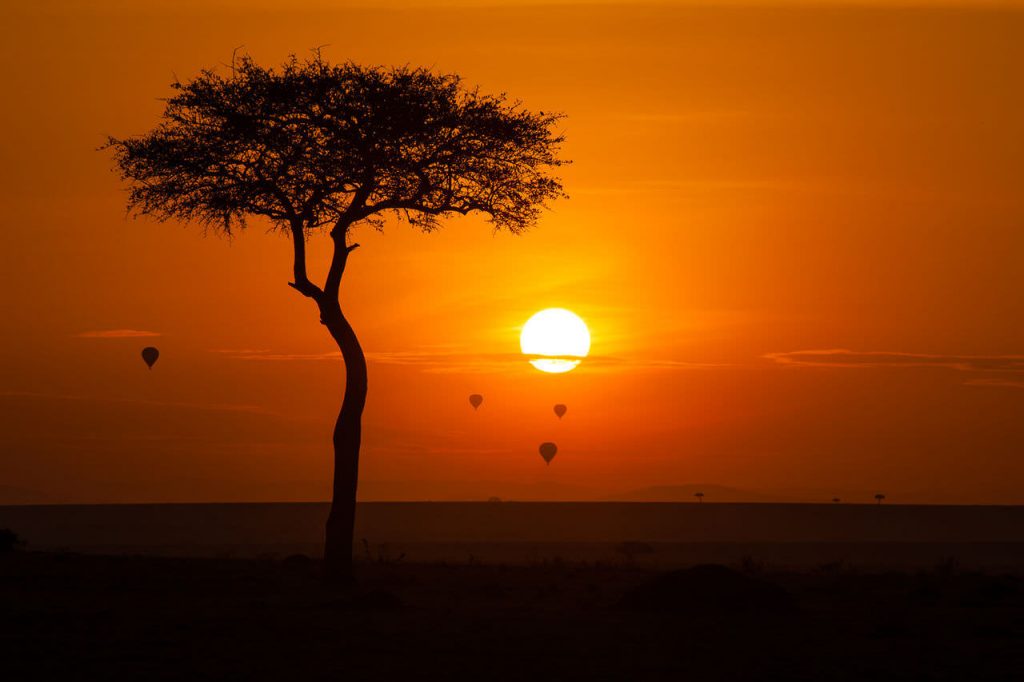 You can’t take Finch Hatton’s biplane for a ride, but you can get the same view from a hot air balloon. Photo: https://commons.wikimedia.org/w/index.php?curid=37376164

The Mara River, which runs through the reserve and drains into Lake Victoria, is also featured in the film. On the banks of this river, the iconic shampoo-scene took place. 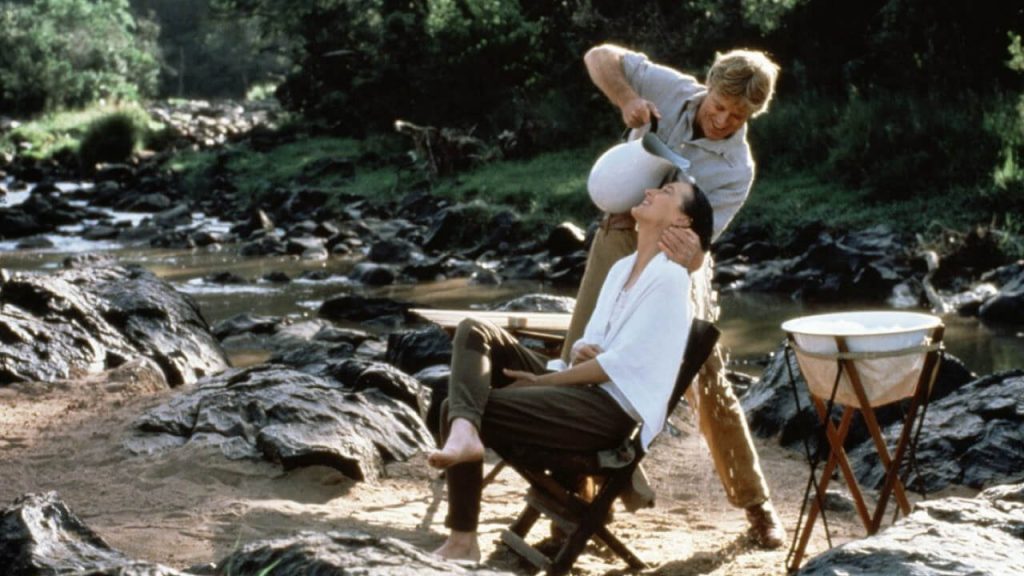 The iconic “shampoo scene” was filmed on the banks of the Mara River. Photo: The Red List.

In fact, here’s a quick bit of trivia about that scene: Robert Redford’s character recites lines from “Rime of the Ancient Mariner” by Coleridge. One of the lines he recites is actually the epitaph of the real Denys Finch Hatton’s grave. During this scene, Redford shampoos Streep’s hair on the banks of the river. Though the scene is very sensual, Streep was actually terrified during the filming due to the presence of territorial hippos nearby.

As mentioned earlier, the residence of the real Karen Blixen was at the foot of these hills. Their peaks are located along the Great Rift Valley, a continuous geographic trench that runs approximately 3,700 miles from Mozambique to South Eastern Africa. The name “Ngong” is an Anglicization of a Maasai phrase meaning “rhinoceros spring.” This area was a major farming region during the colonial period, as Blixen’s history will attest. 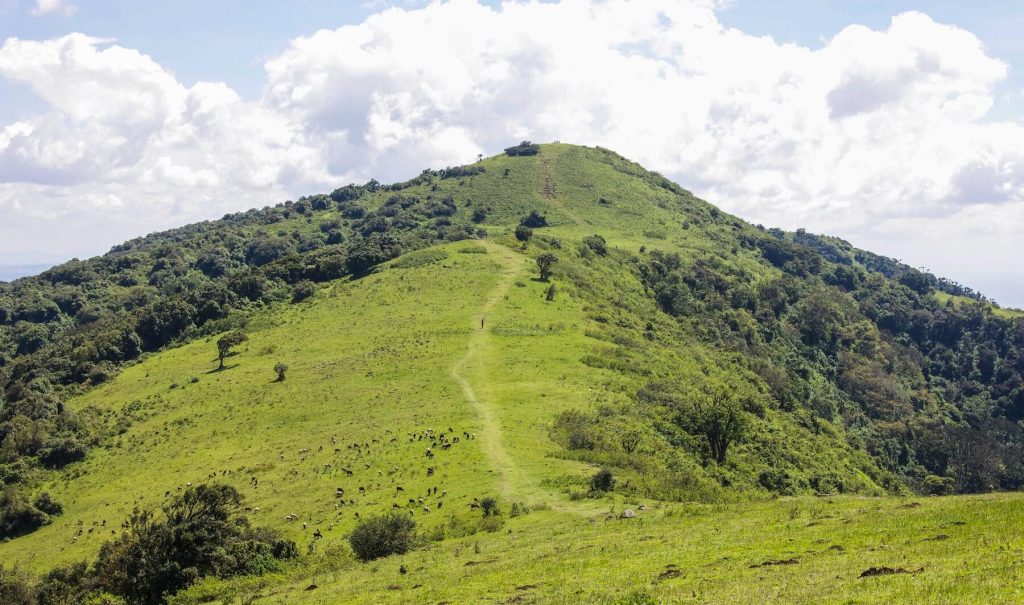 Blixen’s home is located at the foot of the Ngong Hills. Photo: Flickr.

Visitors can take guided tours and are awarded with a bird’s eye view of the surrounding area – not unlike the view Karen Blixen had when she flew over the region in Denys Finch Hatton’s plane.

The epicenter of Out of Africa tourism would have to be the house where Blixen lived. Built in 1912, Karen and her husband purchased the estate in 1917. The house is located in the Nairobi suburb of Karen. (Can you guess who it was named after?) The Karen suburb was created from her former farm lands, and is located about 10 km outside of the city center.

The home where Blixen once lived is now the Karen Blixen Museum. Photo: Regina Hart Flickr.

The museum is open 9:30am – 6:00pm, including weekends and public holidays, and offers continuous tours. You’ll see some of Karen’s original furniture and belongings as well as some props from the film. There’s also a gift shop with both African themed items and Out of Africa-themed items.

If you’re ready to fall in love with Kenya’s romantic landscape, give us a call because we can customize any tour. Whether you want the full Out of Africa experience in a tented camp or a peaceful float over the savannah in a hot air balloon, Jaya Travel can make it happen. Call today!