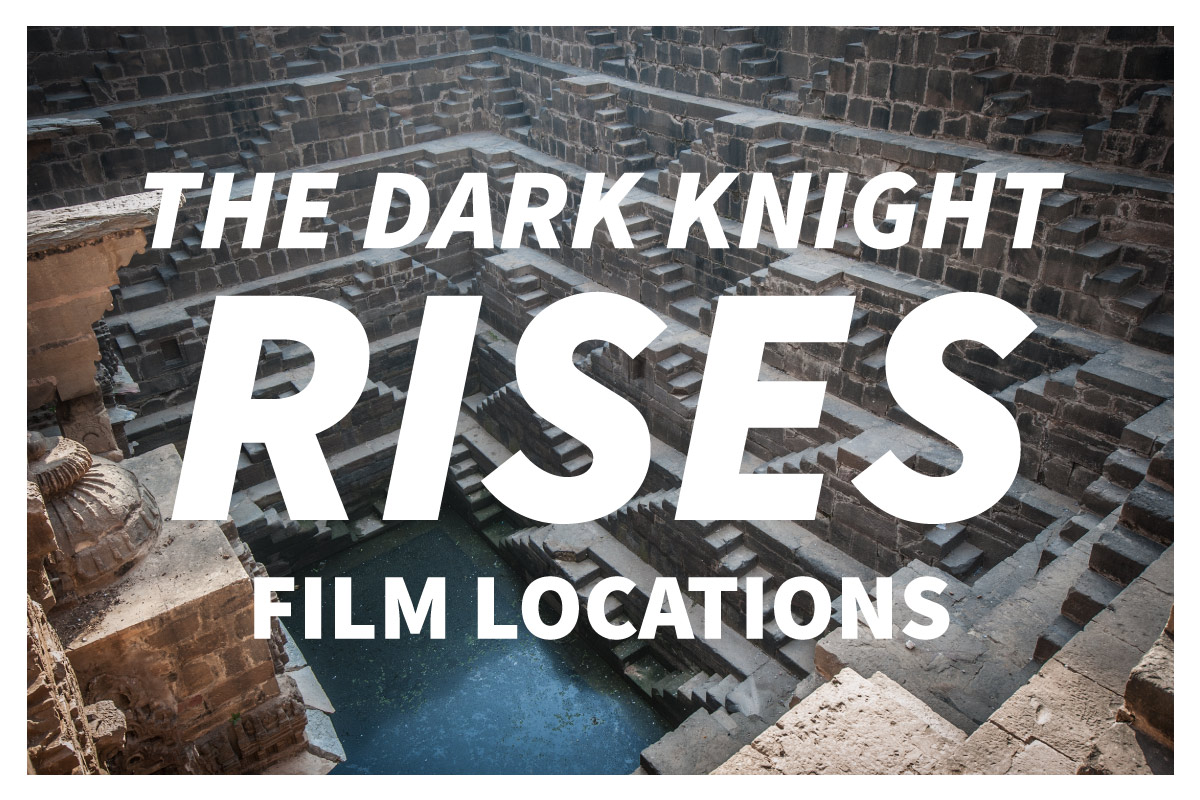 Welcome to another edition of On Location! In this series, we show you extraordinary places around the world – that you can visit – which served as the setting for films! Today, we’ll be focusing on the prison scenes from The Dark Knight Rises. Two ancient Indian structures served as the film location for the place where Bruce Wayne had to climb to freedom and where the monster Bane was created. 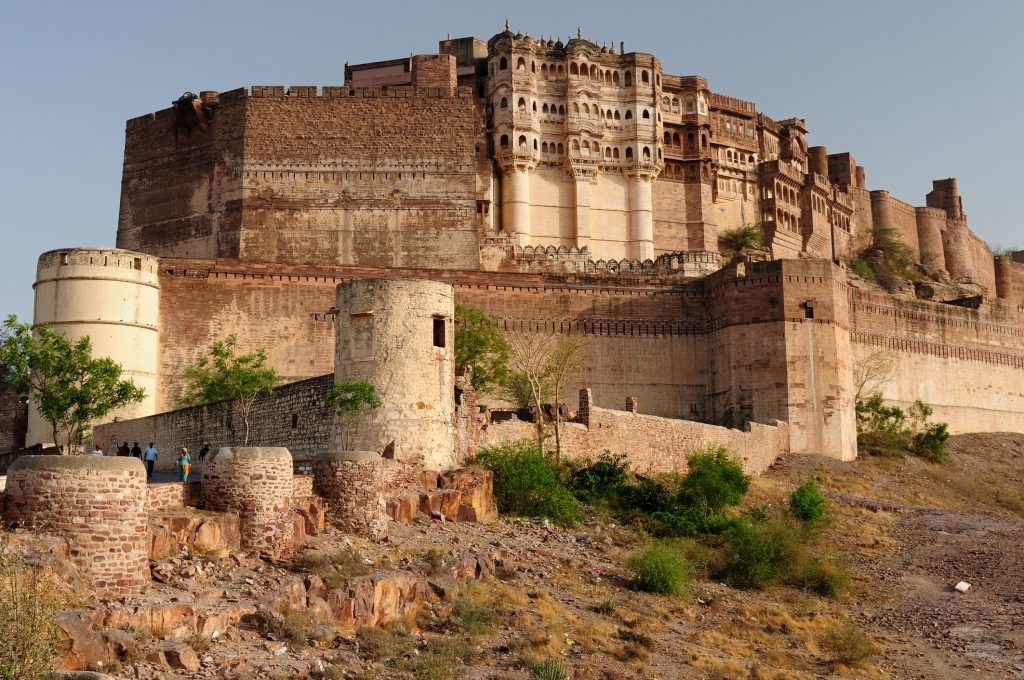 Mehrangarh Fort was used as the exterior of the prison in “The Dark Knight Rises.”

Towering above the city of Jodhpur, this fort is one of India’s largest forts. The exterior of this magnificent structure served as the exterior of the prison in which Bruce Wayne finds himself in The Dark Knight Rises.

Mehrangarh was built by the man who is credited with founding the city of Jodhpur. This man was named Rao Jodha, and he decided to create a new fort where the current structure stands. The existing fort would not have been feasible for defending the city.

Construction on the main building began in 1459. At a later date, control of the fort actually came under the Mughal empire, the same rulers who built the Taj Mahal. When the British took control of India, warring between different Indian rulers was squelched. As such, the need for strong defensive forts like Mehrangarh ended. The Maharajas at this time desired to live in more modernized palaces. The last Maharaja to make the fort a home was Hanwat Singh in the 1950s.

A series of seven gates provide access to the fort. Each of these gates were added on over time, and so you can trace the history of the building across different historical periods, based on the architectural styles. It’s interesting to note these gates were often constructed to commemorate military victories.

Within the fort, there are several palaces worth visiting. With names like “Pearl,” “Flower,” and “Mirror,” the palaces speak to the luxury and wealth of the powers who built them. Artifacts of note include “howdahs,” which are wooden contraptions used to carry people on the backs of elephants, as well as clothing, weapons, jewelry, and other artifacts from the 15th century onward. 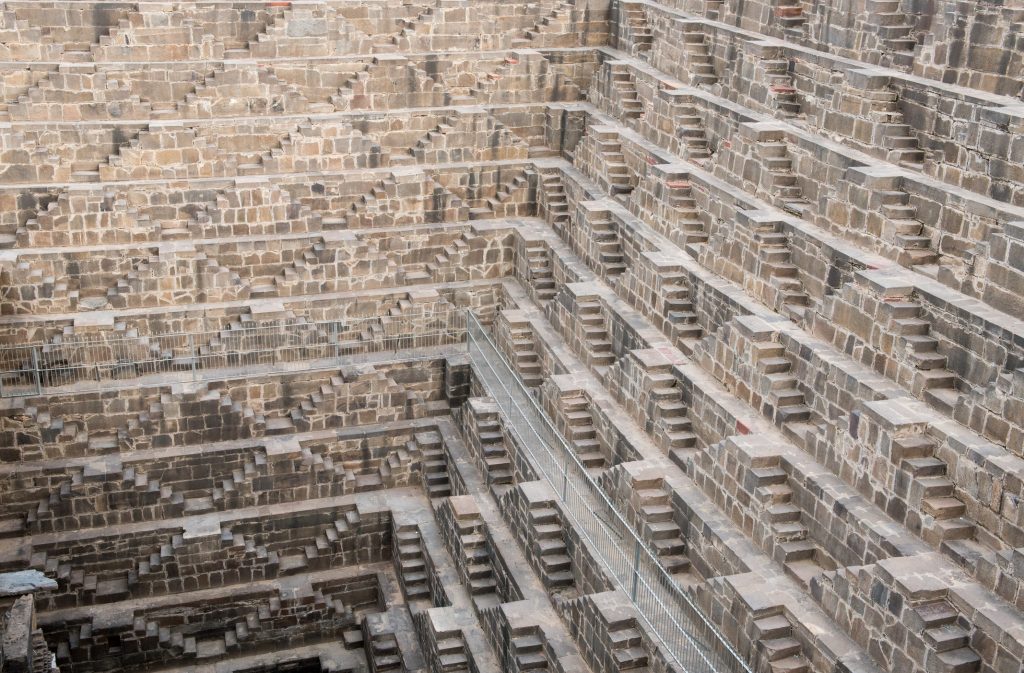 The ancient stepwell of Chand Baori served as the interior walls of the prison in “The Dark Knight Rises.”

Located in the heart of Rajasthan, Chand Baori serves as the film location for the interior prison scenes in The Dark Knight Rises. A “baori” is a stepwell, a structure unique to India. In the arid climate of Rajasthan, these wells were imperative for the storage of water in ancient times. Though the city is abandoned, many visitors come here every year. Its popularity has grown since it was featured in The Dark Knight Rises.

This stepwell was constructed between 800 and 900 CE by King Chanda. It was dedicated to the goddess of joy and happiness. In total, there are 3,500 steps and 13 stories. It was engineered to conserve water and the many thousands of steps allow visitors a variety of paths to the water at the bottom. If you’re familiar with the works of M.C. Escher, you’ll feel like you’ve stepped inside one of his paintings when you visit the well. In addition to storing the water, the temperature at the bottom of the well was designed to remain steady to allow for comfortable bathing.

If you’d like to visit these impressive forts, contact us today! We develop custom tours to anywhere in the world and the quotes are always free!