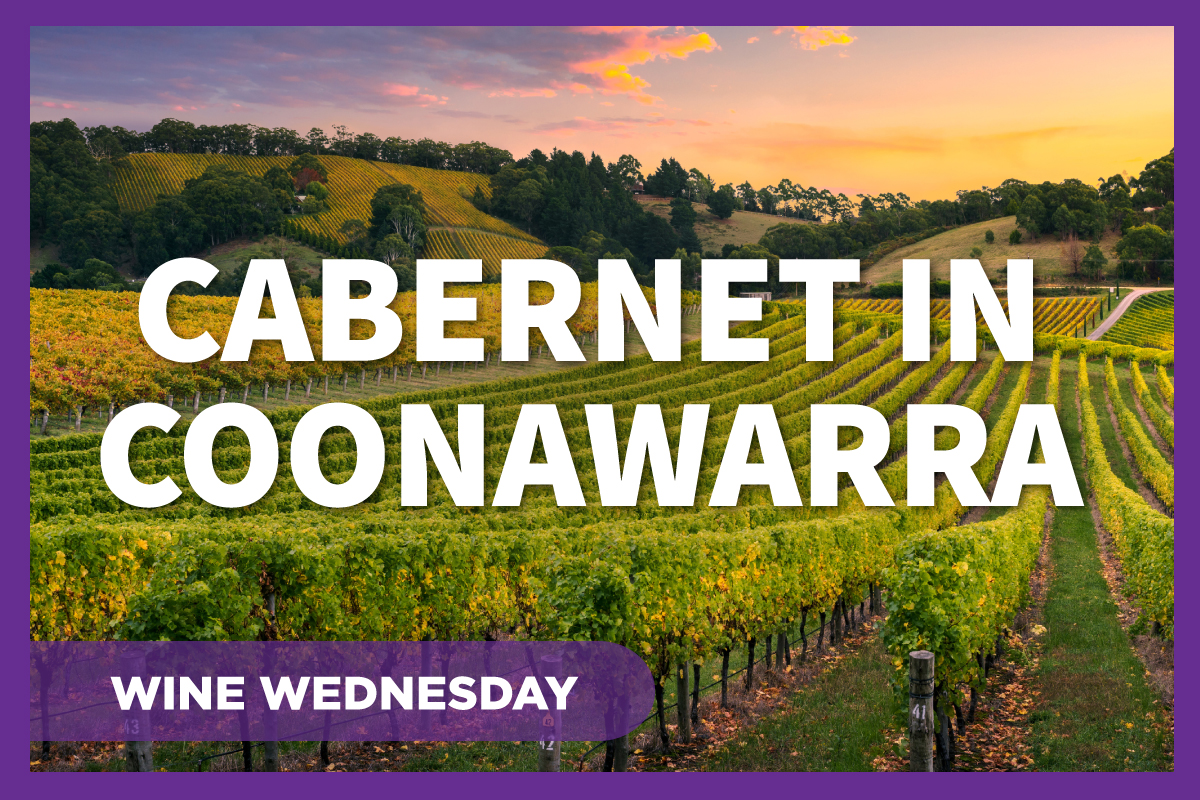 Welcome to the first installment of Wine Wednesday in 2019! For this segment, we’re going way, way south on the globe to the Coonawarra region of south Australia. Wines from this area grow on some of the most sought-after soil in the country. Reds are the claim to fame here, but we’ll also show you some fantastic whites. Joins us as we explore the fascinating Coonawarra wine region! 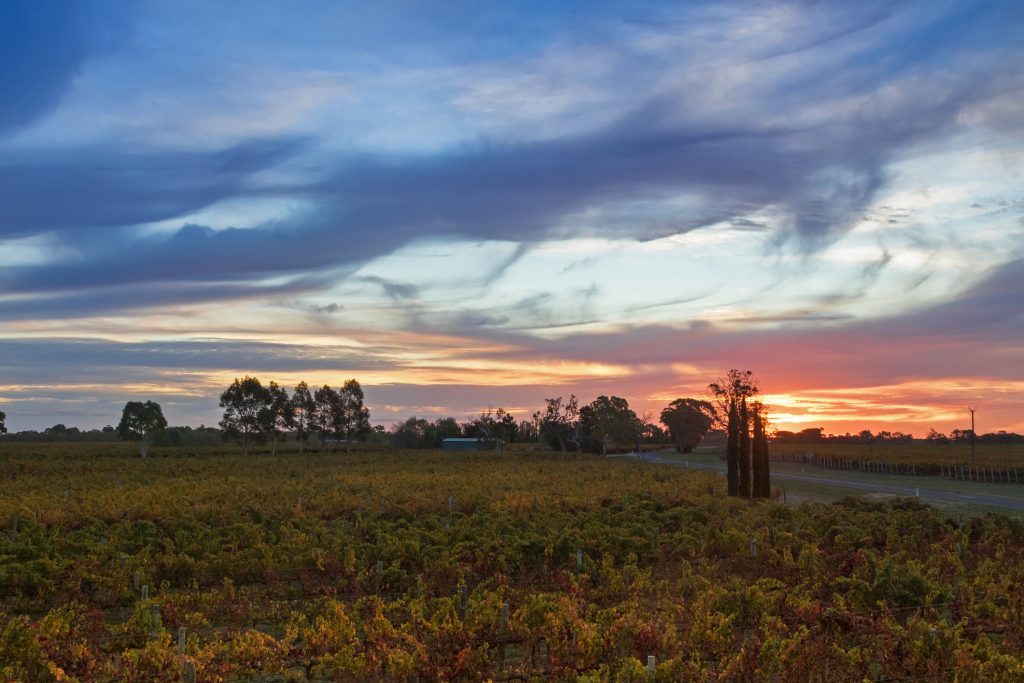 The sun sets on the Coonawarra region – one of South Australia’s finest.

The name “Coonawarra” comes from an Aboriginal word meaning “honeysuckle.” Located halfway between Adelaide to the Northwest and Melbourne to the East, the Coonawarra wine region boasts a limestone soil known as “terra rossa.” This particular soil is a reddish clay with neutral pH conditions. It’s also found in the Mediterranean and La Mancha region of Spain. (Yes, that would be the region from which Don Quixote hails.)

Coonawarra is most famous for its reds – particularly Cabernet Sauvignon and Shiraz – though you’ll also find a few choice whites sprinkled in. All the wineries, however, owe their foundation to John Riddoch. A Scottish immigrant, Riddoch came to Australia in the 1860s and was the first to plant vines in the area. As time went on, various parcels of land were sectioned off and sold, descendants married into other local families, and the wine industry here weakened in the 1950s. However, the region was rejuvenated in the 1960s and now boasts some of the most popular Australian wine, and it’s all thanks to John Riddoch who first recognized the region’s potential.

Wynns holds the distinction of having the longest established vineyards in the Coonawarra wine region. The southerly climate here produces intensely-flavored grapes – perfect for the flagship variety of reds.

Be sure to sample the Black Label when you visit. This staple of Australian wine is produced exclusively from the top 20 – 25% of Cabernet Sauvignon grapes harvested. It’s truly the cream of the crop.  The uniqueness alone makes this wine worth having, and when you do, expect mulberries, red cherries, and oak to delight your palate.

Also noteworthy is the V & A Lane variety. Named for a local road, this Shiraz is crimson in color and offers a delectable smokiness complemented by fruits, nuts, and black spice.

This 167-year-old winery is open daily to the public from 10am – 5pm, except for specific public holidays, making it very convenient for those visiting the region. Guides will take guests through the range of wines. You’ll also learn the vinification process as well as the extensive history of this winery.

Recommended wines include the Octavian and the Signature. The Octavian is an “Old Vine” Shiraz. Grapes chosen for this variety hail from some of the oldest vines in the world. The Signature leaves its stamp upon the Australian wine scene as a Barossa Cabernet-Shiraz blend. First launched in 1962, this particular wine encapsulates more than 50 vintages and 50 people and their stories.

If you’re unable to make it to Coonawarra, rest assured. You can try their wine at the Penfolds Magill Estate Restaurant in Adelaide.

Begun in 1844, the foundation of the winery was laid down by Dr. Christopher and Mary Penfold. Over the next 26 years, Christopher’s reputation as a physician grew along with the success of the winery. As such, his wife Mary was often in charge of running the business, and upon his death in 1870, she took charge of it entirely. Fourteen years later when she retired, she transferred management to her daughter Georgina. It’s interesting to note how much of this winery’s success is owed to women.  So much so that a short time later in the 1920s, Penfolds actually produced one third of all South Australia’s wine.

Whether you visit their restaurant or the winery directly, be sure to try the Cellar Reserve: Cabernet Sauvignon if you are able. This rich wine has notes of ripe cassis, dark chocolate tannins and oak, and with a limited release of just four years (2005, 2006, 2008, 2010) you’ll want to get your hands on a glass if you’re lucky enough.

If you’re planning a trip to the Coonawarra wine region this year, sample something from the Tribute Range, crafted to celebrate the winery’s 175th Anniversary in 2019. The Noble Explorer Shiraz captures the spirit of the region. A full-bodied wine, this rich variety has fruity aromas with notes of oak and spice.

Established in the 1970s by Peter and Judy Rymill, this winery is as impressive as the people who founded it. Apart from excelling at winemaking, the Rymils were also world champion equestrians. Further, they descended from John Riddoch Rymil who led the 1934-37 British Graham Land Expedition to the Antarctic.

The pioneering spirit does not stop with the family tree, however. Rymil had adopted sustainable farming methods over the years including the introduction of natural fertilizers, encouraging biodiversity on their lands.

Not surprisingly, the varieties incorporate equestrian terms into their names. The 2018 Yearling Sauvignon Blanc. As mentioned earlier, the Coonawarra wine region treasures its reds. However,  you’ll find hidden gems of white wine. Made from tropical fruit, lime, and herbs, the Yearling is refreshing and delightful but, like its namesake, you’ll want to enjoy this while it’s young.

The 2016 Dark Horse Cabernet Sauvignon offers a more mature taste. Unlike the Yearling, the Dark Horse is able to cellar for five to seven years and promises plum, dark fruits, and a mocha aroma with cherries, mint, and chocolate on the palate.

If the Coonawarra wine region sounds like your idea of a dream vacation, give us a call. We’re happy to craft customized tours around wine tasting. Start trip planning today!