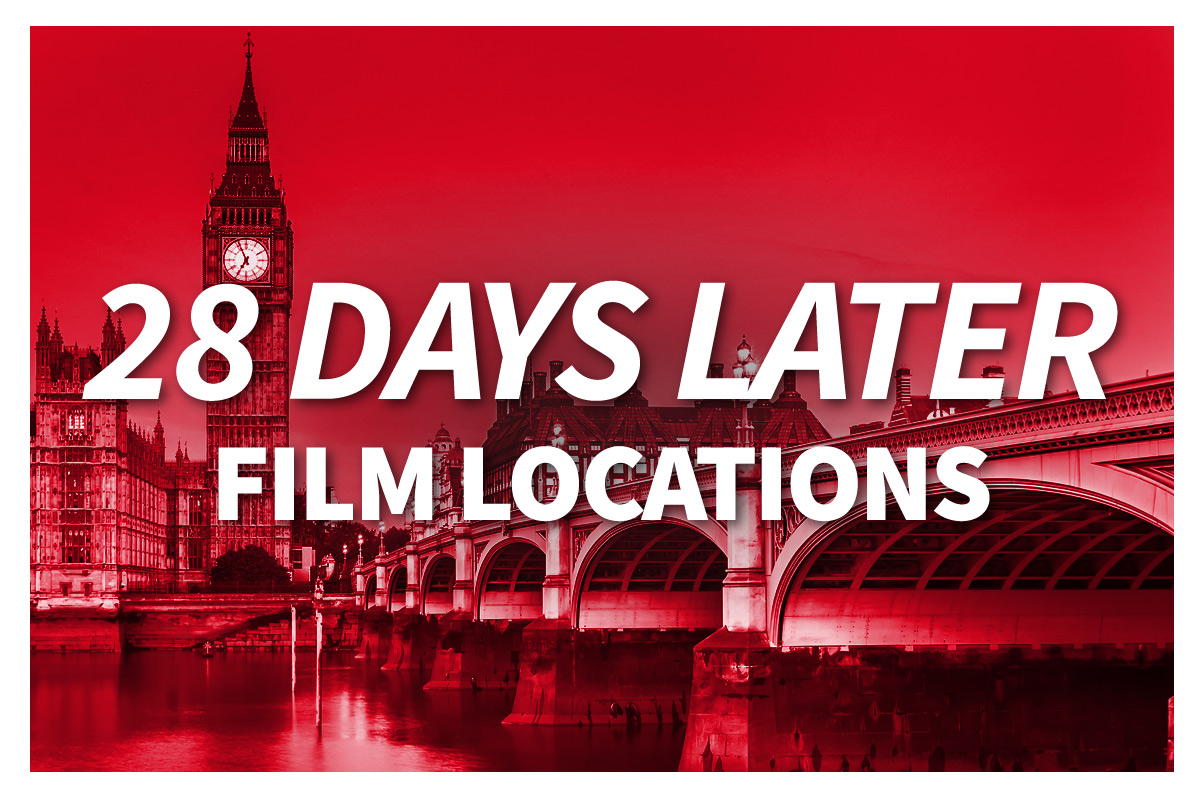 Welcome to our “On Location” series where we go off-screen to real filming locations. Today, we’re quarantined to London where director Danny Boyle and writer Alex Garland filmed the post-apocalyptic horror, 28 Days Later.

Twenty-eight days after a destructive rage virus breaks out, Jim (Cillian Murphy) wakes up alone in a hospital. He begins exploring the building and discovers it’s completely void of people. He exits to the city, crossing the Westminster Bridge, only to find London in similar disarray. Walking from one eerily deserted landmark to another, he enters a church. While inside, he comes in contact with an infected priest who viciously attacks him. Two other survivors save Jim and update him on the situation: virus exposure, infection, epidemic, evacuation, nationwide devastation, etc.

The story takes place in present-day England and mainly showcases London. What makes the generally familiar city appear as a different world, however, are the utterly barren streets and absence of life. Starting with the hospital Jim wakes up in, here are places you can visit that were once the sites of a macabre epidemic (at least on film).

St. Thomas Hospital reps significant fame by hosting medical game changers like William Cheselden, Florence Nightingale, and Sir Harold Ridley. The hospital has stood in its current location since 1862, but is assumed to have been founded in 12th century Southwark. It acts as a teaching hospital during the week and is often hired out to filmmakers during the weekends with the proceeds benefiting the hospital’s trust fund. You can imagine the scads of blockades movie-makers would encounter to vacate a working hospital and capture the hair-raising solitude Jim experiences in this early scene; so being able to clear the surroundings for production gave Boyle an incredible platform to achieve the film’s ambiance. 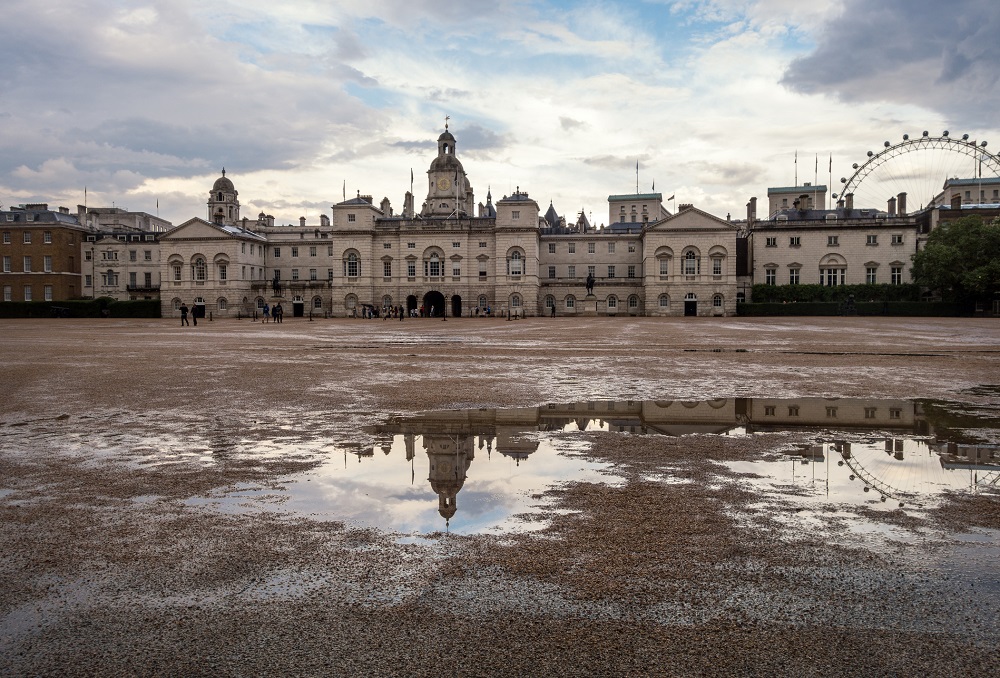 As Jim crosses Westminster Bridge upon leaving the hospital, filmmakers seize the opportunity to provide an epic shot of London’s skyline featuring Big Ben and the Houses of Parliament. Jim is seen walking across the yard at Horse Guards Parade, still oblivious to what has happened. The Horse Guards Parade is a massive parade ground that holds annual military ceremonies and public events. You may recognize it from the 2012 Summer Olympics’ beach volleyball games. British rock band, Muse, also performed a free concert here after the premier of World War Z (another zombie movie!) at Leicester Square. You can visit and tour Horse Guards year-round, imagining what Jim must have felt when he came upon this generally bustling place and found it deserted.

More evidence comes together as Jim goes to Piccadilly Circus less than one mile away. He approaches the Shaftesbury Memorial Fountain, which is boarded off and covered with handmade missing person posters. When it’s not the scene of a zombie epidemic, the monument invites a photo op with Alfred Gilbert’s cupid-like sculpture. The sculpture is often confused with the Greek god of attraction (cupid), but it’s intended to be the “god of selfless love” to represent the Saftesbury family’s historic philanthropy. It is considered London’s most famous sculpture. 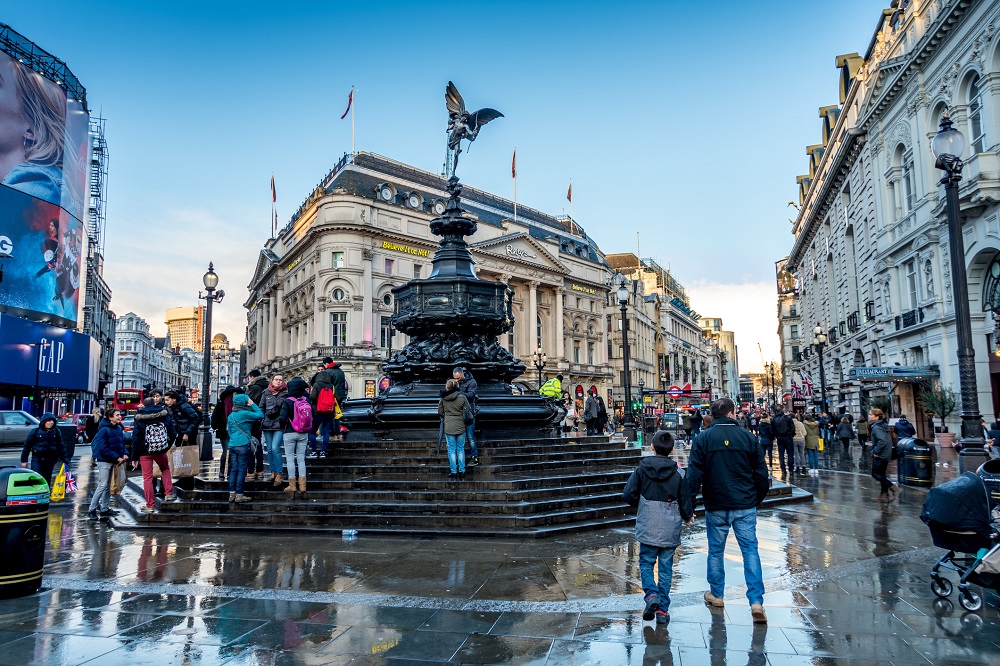 Many mistake the “god of selfless love” statue at Shaftesbury Memorial Fountain statue for cupid.

The first building Jim goes into after leaving the hospital is a church. Peeks of sunlight lend comprehension to the dark interior, but it’s hard to make out characteristics. A large, stained glass window behind the alter that reveals it as St. Anne’s Church in London. It was built through the 1711 Act of Parliament, calling for the construction of 50 churches for the growing city. In the film, Jim looks over the balcony to discover the auditorium is covered with bodies, the infected hiding among them. Jim has to make a run for it when a priest attacks, disturbing other zombies in the process. That will unlikely be the case when you visit, so just enjoy the ancient interior while grinning over the fact that you’re standing where Cillian Murphey stood while filming!

Additional film locations include Canary Wharf tube station, the Trafalgar House, and a happy scene taking place at a Budgens Supermarket—tipping a hat to the UK’s well-known grocery chain. The movie itself is a fine brochure for London’s architectural and historic attractions, but you should see them for yourself.

Plan a visit of your own (sans the threat of zombies) and call Jaya Travel today!