Monday Motivation: The New Seven Wonders of the World

Of the Seven Wonders of the Ancient World, only the Great Pyramid of Giza remains. The rest have been lost to history. At the turn of the millennia, however, it was decided that perhaps it was time for new ones. From 2000 to 2007, more than 100 million people around the world chose from 200 existing monuments. The winners had the distinction of being the New Wonders of the World. If you’re in need of some travel motivation, why not add one – or all – of these incredible places to your travel list?

Discover the New Seven Wonders of the World

The Great Wall of China 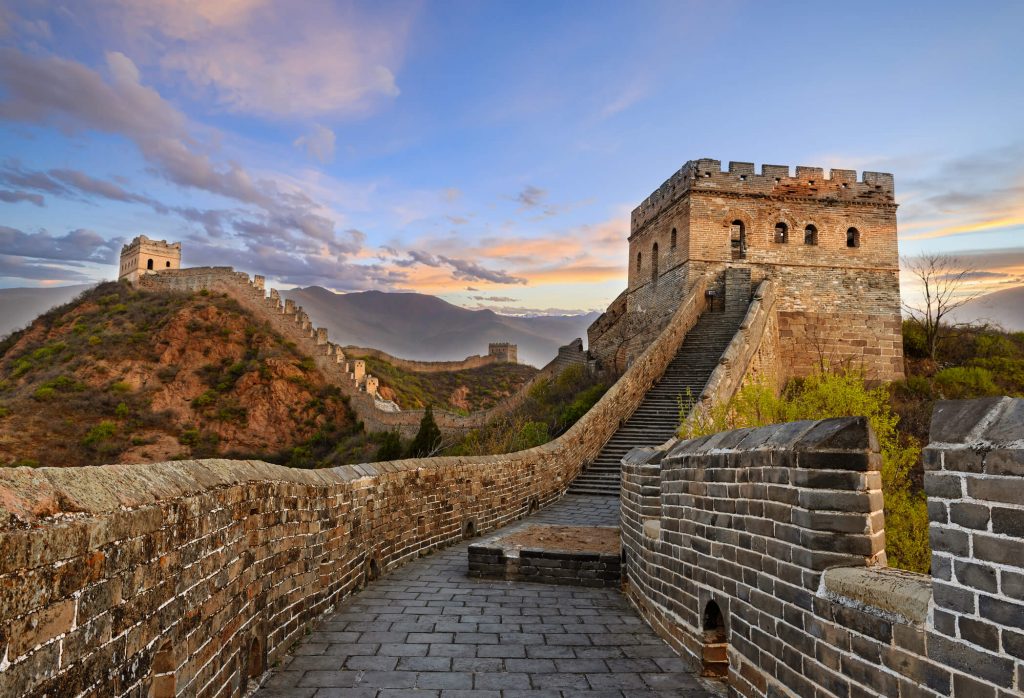 The Great Wall of China is certainly the longest of the New Seven Wonders of the World.

As early as the 7th century CE, a series of walls have been in place along China’s northern border. These earliest sections of the Great Wall were originally built from mud and earth before bricks became the preferred construction medium. Many dynasties have made improvements and strengthened fortifications. The most famous sections, which you’ll recognize from pictures of the wall, were constructed during the Ming dynasty (1368 – 1644). The wall has served as both a defensive measure against invading nomadic peoples, like the Mongols, and also was used to curb immigration and emigration. The Ming section of the wall measures 5,500  miles, but if one takes into consideration the entire wall, the total is an impressive 13,171 miles. 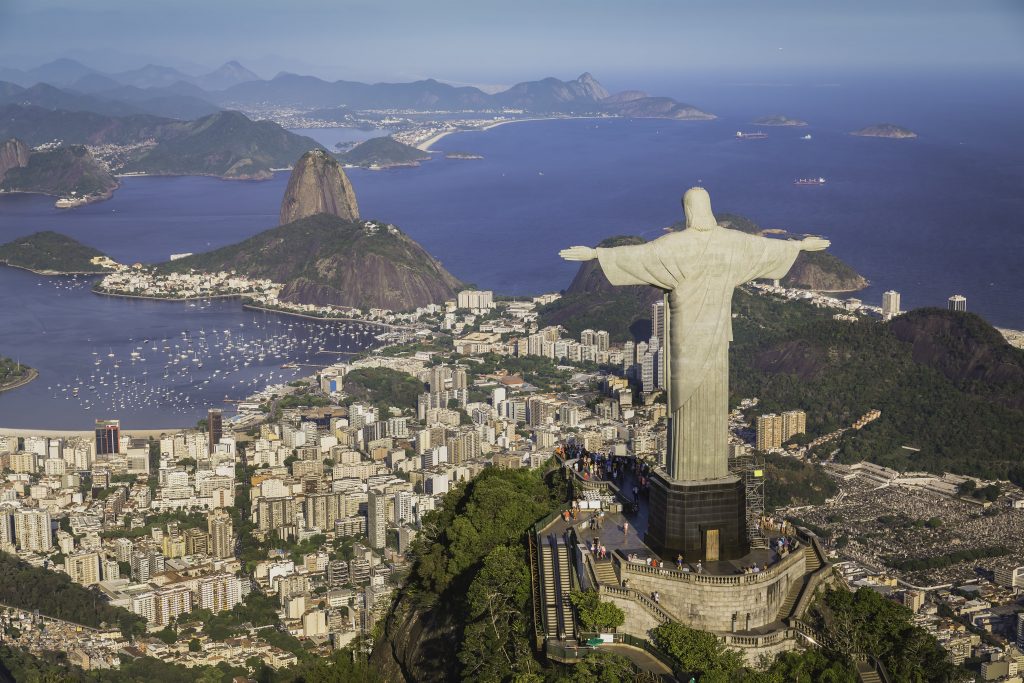 Christ the Redeemer is both a symbol of Christianity and icon of Brazil.

Standing watch over Rio, this famous Art Deco statue was created by French sculptor Paul Landowski between 1922 and 1931. Located atop Corcovado Mountain, the sculpture measures 98 feet high – not including the pedestal. The statue is both a symbol of Christianity and an iconic landmark of Brazil. 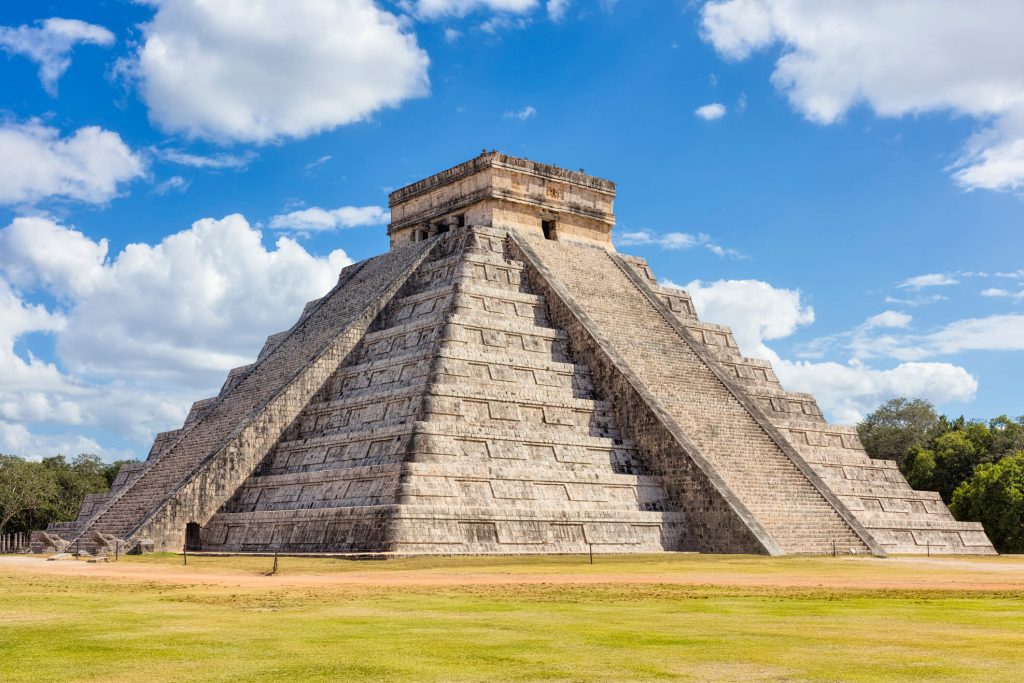 El Castillo is the most famous building of Chichen Itza.

It may surprise you that Egypt is not the only place known for its pyramids. Nestled in the heart of the Yucatan peninsula, Chichen Itza is an ancient, pre-Columbian city built by the Maya people during the Terminal Classic Period of their history – about 800 – 900 CE. Its most famous structure is the pyramid known as El Castillo which is a temple to the feathered snake god, Kukulcan. Incredibly, during the spring and fall equinoxes, the shadow of the sun is cast upon the pyramid in such a way that it appears as if Kukulcan is descending the steps of the pyramid. In addition to El Castillo, the Chichen Itza complex is home to a ballcourt where a sacred game was held, an observatory, and the Temple of the Warriors.

Machu Picchu is believed to be the summer estate of the Incan emperor, Pachacuti.

Rising nearly 8,000 feet up, perched precariously atop the Andes, lies the Inca citadel of Machu Picchu. Experts believe this archeological wonder was built as a summer residence for Pachacuti, an Incan emperor who lived from 1438 – 1472. However, it’s impossible to tell for certain since the Inca did not have any written records. During the time of the Spanish conquistadors, Machu Picchu was abandoned, and even locals who remained in the area over the centuries forgot it.

It was not until 1911, when an American historian named Hiram Bingham, rediscovered it. Ever since it has returned to public knowledge, Machu Picchu has been a symbol of the Inca and a jewel of Peruvian culture and history. This UNESCO World Heritage site is even more impressive when you consider the Inca did not have the technology of the wheel, yet somehow managed to transport all the stone 8,000 feet up a mountain. And the stones of the complex are fitted together so perfectly that not even the thin blade of a knife can slip between them. 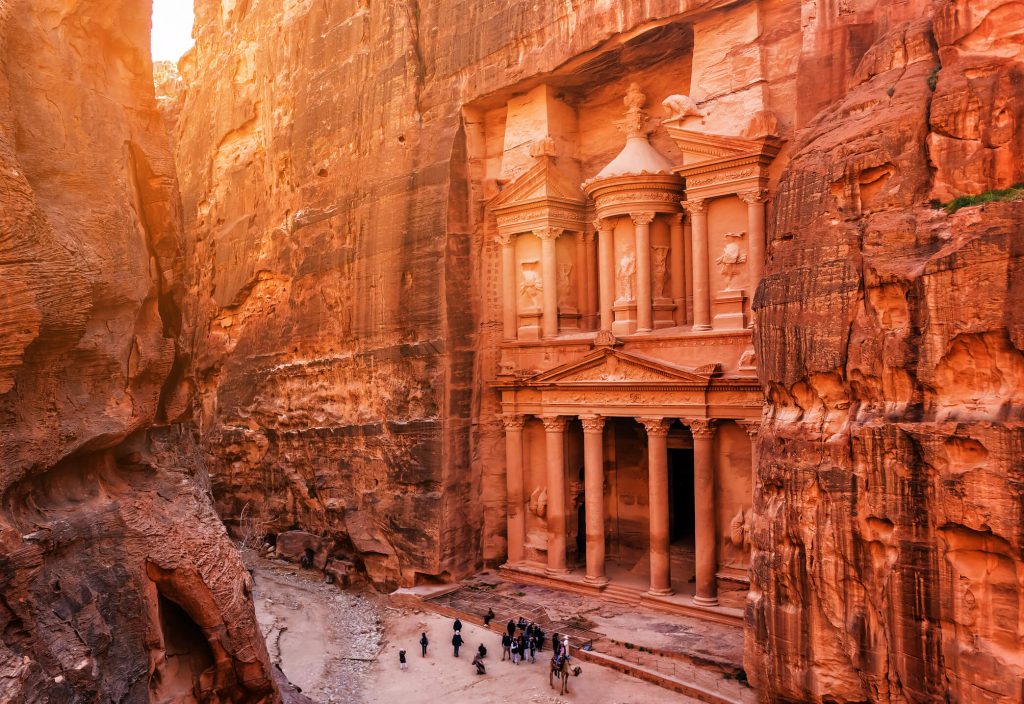 Petra’s treasury is one of the New Seven Wonders of the World and has appeared in many films.

While the site of Petra is actually a series of buildings, the most famous one is Al Khazneh, the Treasury. You will recognize it as the site of the Holy Grail in Indiana Jones and the Last Crusade. The ancient city lies in a mountainous area inhabited since 7,000 BCE. Like Machu Picchu, the city was lost to history for many centuries until rediscovery in 1812. Unlike the other Seven Wonders, this structure is unique due to the fact that it is cut from the rock face, not constructed from blocks of stone. The city is also called “the Rose City” because the stone gives the structures a pinkish hue. 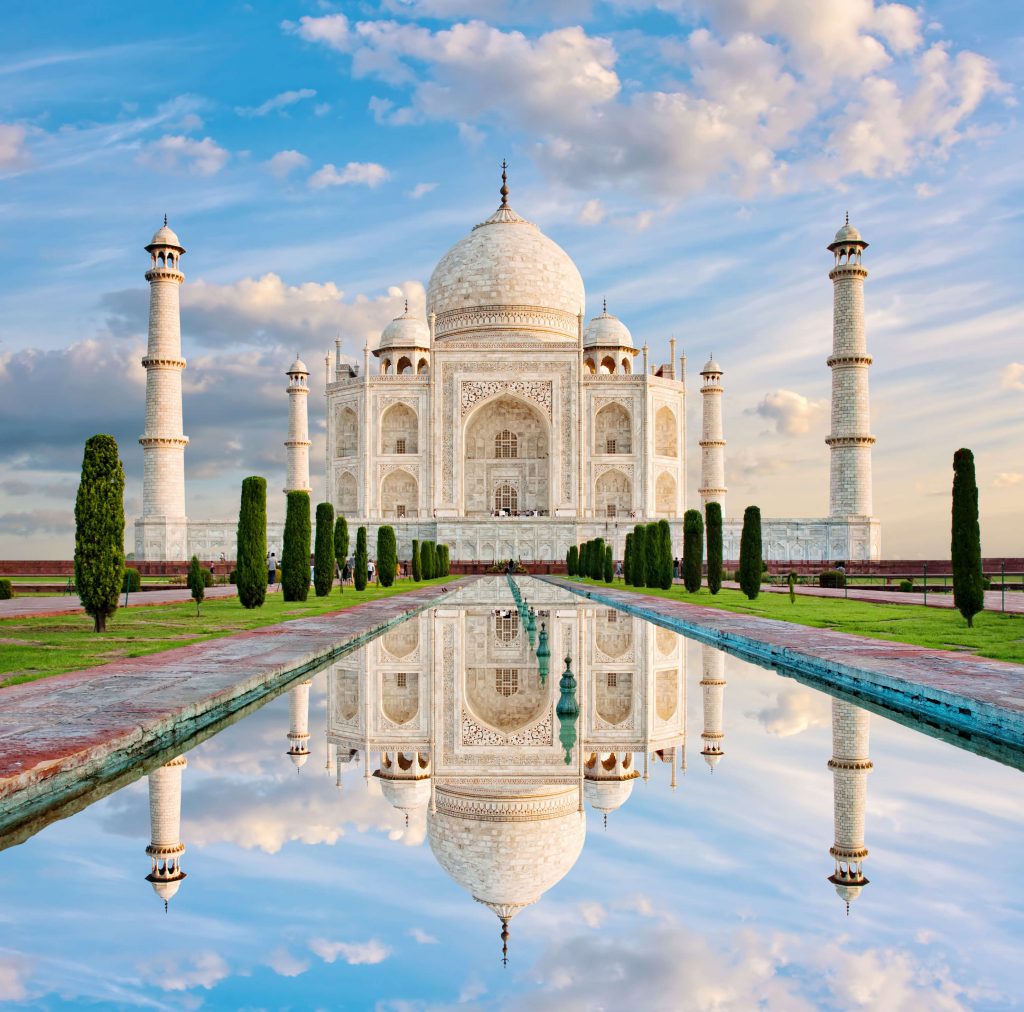 India’s most famous landmark is the resting place of Mughal emperor Shah Jahan and his beloved wife, Mumtaz Mahan.

Commissioned by the Mughal Emperor Shah Jahan in 1632, this complex is the final resting place for his favorite wife, Mumtaz Mahal. Architecturally, the tomb draws on Persian and Mughal design utilizing white marble with inlaid semi-precious stones. The emperor was so distraught after the death of his beloved wife, he chose to be buried with her. 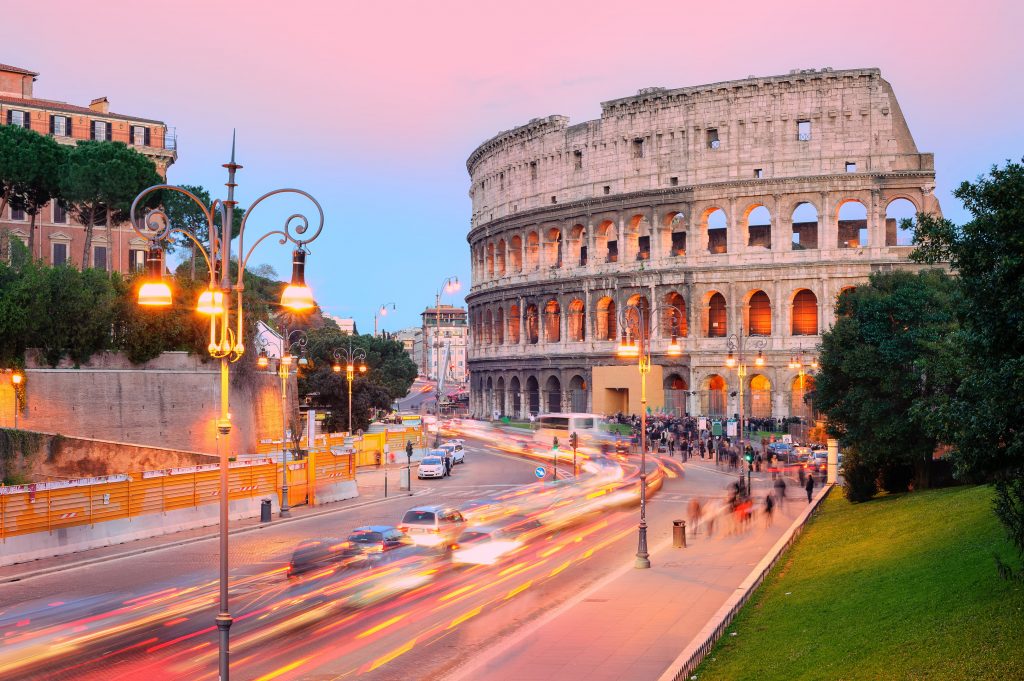 Rome’s Colosseum was once the staging ground for fierce gladiator fights and even mock sea battles.

The Colosseum is an ancient Roman amphitheater constructed from limestone, volcanic rock, and concrete between 70 – 80 CE. It could hold as many as 80,000 people for gladiator fights, dramas, and even mock sea battles. Ancient engineers were able to fill the stadium with water and drain it again – a true engineering feat for a people without the aid of modern technology.

Ready to check any – or all! – of these treasures off your travel list? Let us book your custom vacation for you! Start with a free quote from Jaya.