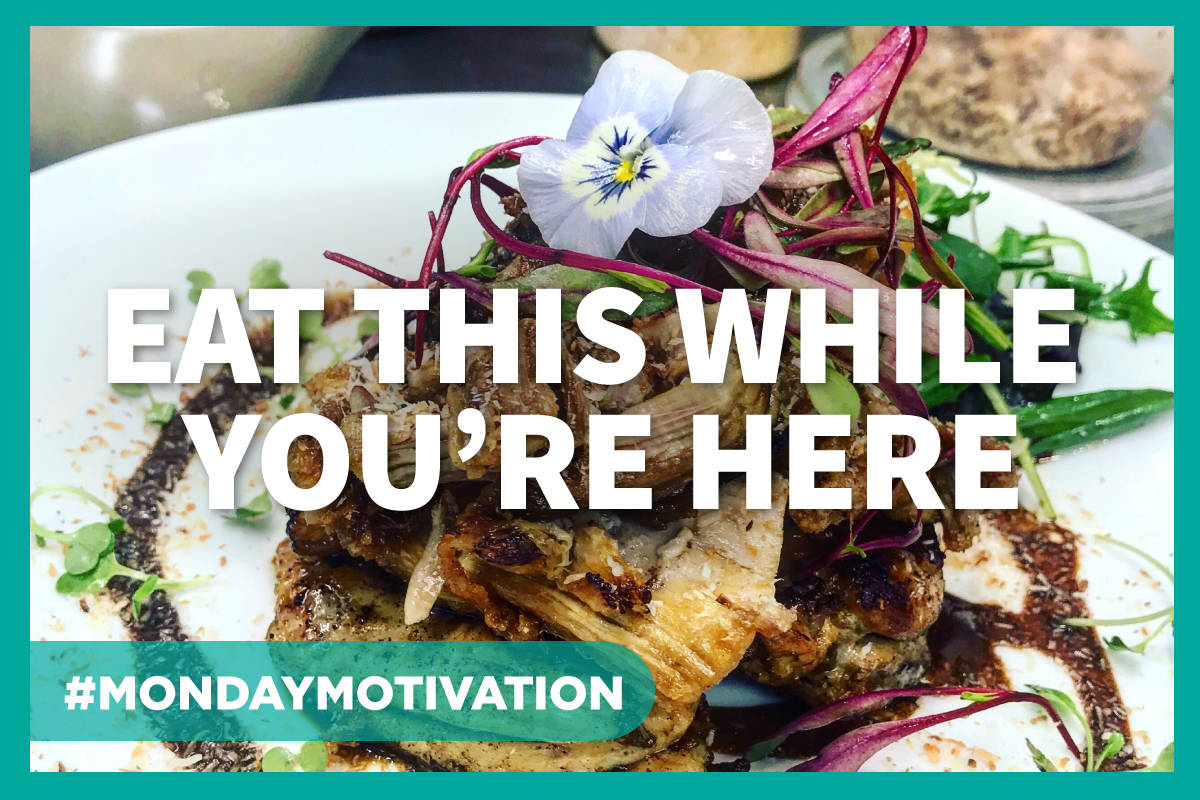 If you go to Philly, you MUST eat a cheesesteak. If you go to Canada, you HAVE TO try poutine. And what’s a visit to England without a basket of Fish and Chips? In this edition of Monday Motivation, we’re ordering staple dishes in these parts of the world. (Because what’s more universally motivating than food?) 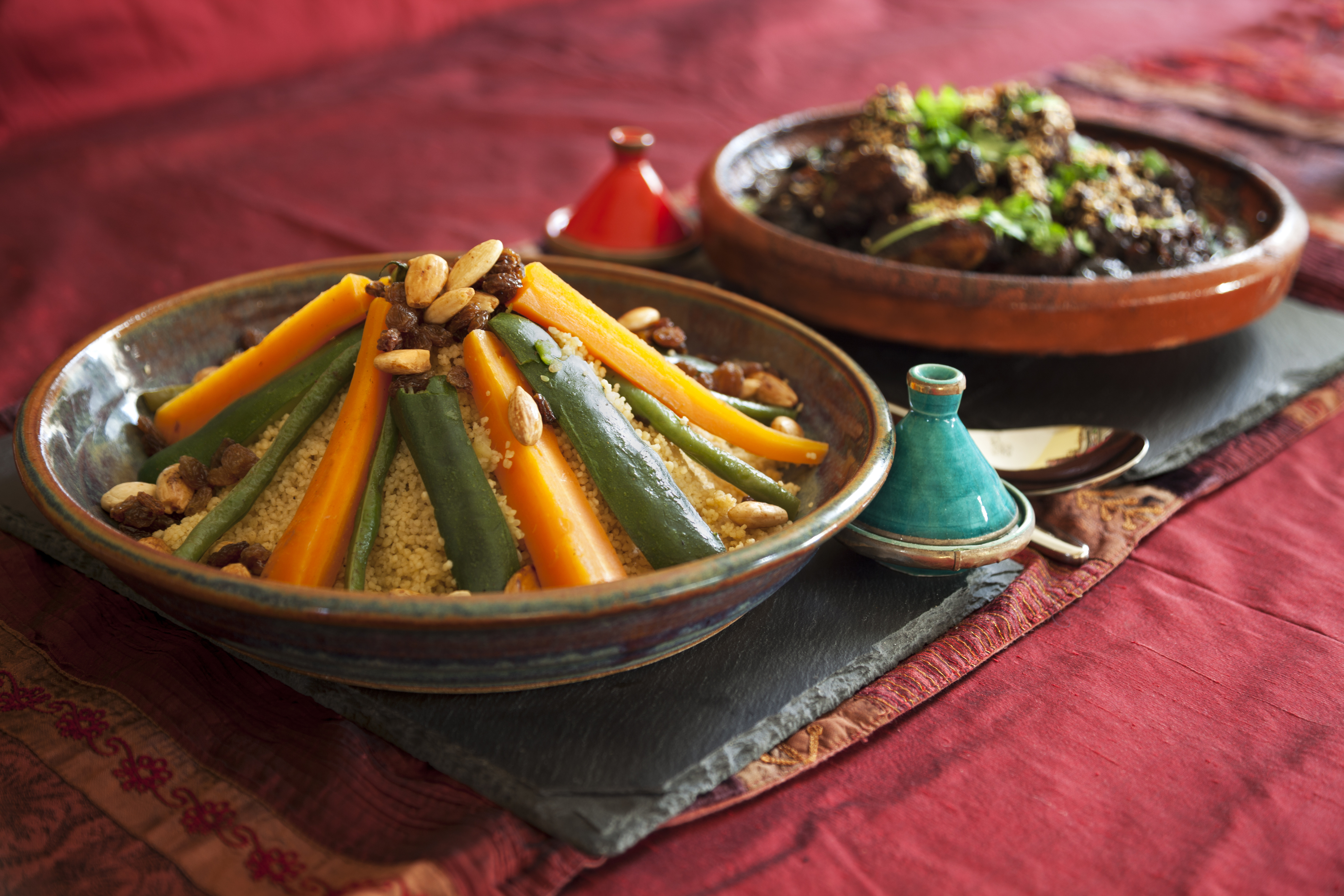 Couscous serves as a base and what people put on their couscous varies among countries.

Don’t leave the northern region of Africa without getting a dish of the food so nice they named it twice. Couscous has been enjoyed as a staple dish since the 7th century, eaten by the native Berbers of Northern Africa. A more recent mention of Couscous can be found in a 13th century cookbook, giving you an idea of how crucial this dish was to the African diet.

Couscous is made by grinding durum wheat. Although it sounds exotic, “durum” wheat is just a coarse type of flour. The grains produced by milling durum wheat are called “semolina.” The semolina is sprinkled with water and formed into the small pellets that define Couscous’s comforting characteristic. The Couscous is used as a base to top with vegetables, meats, seafood, and even sugar when it’s being served as a dessert. 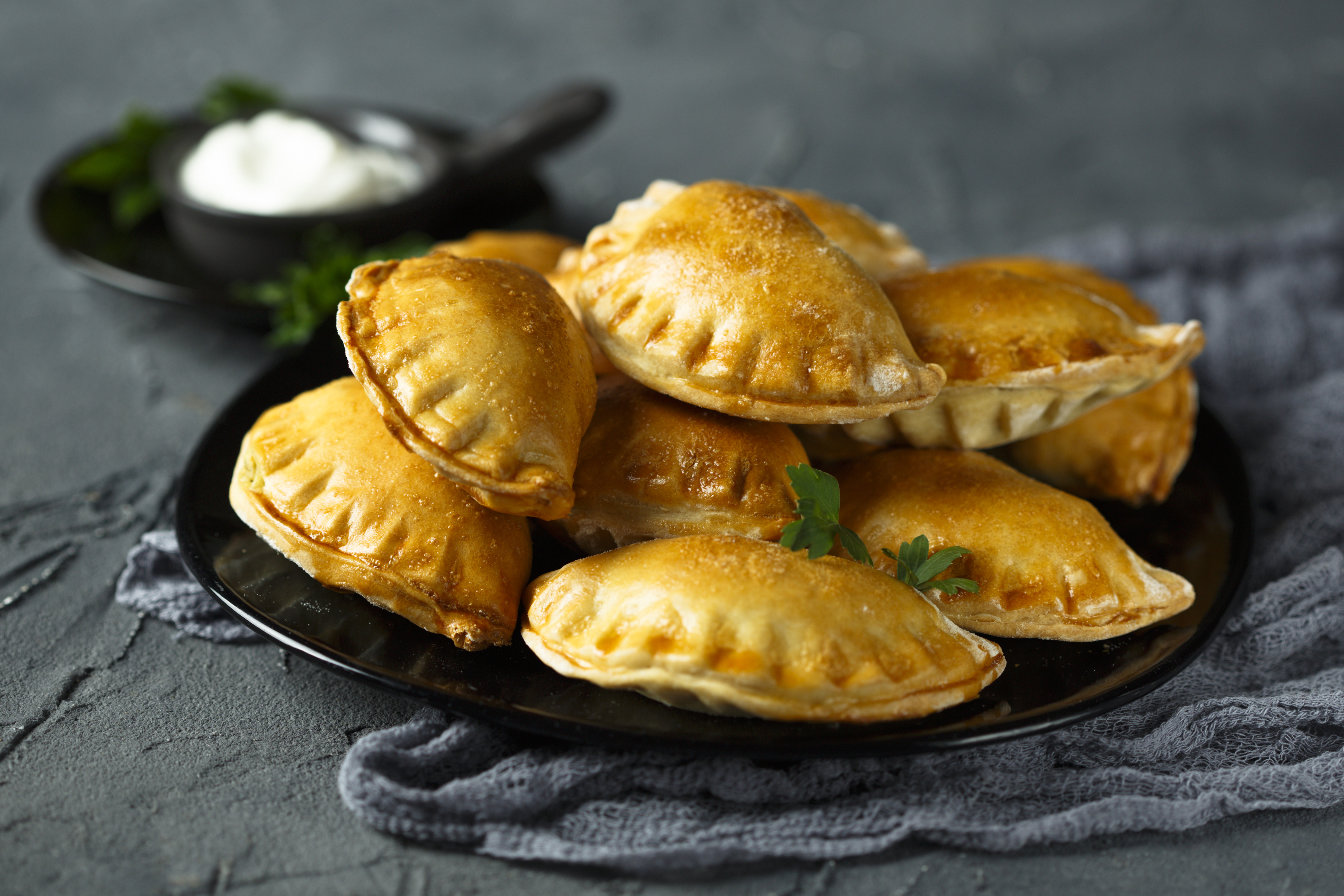 When researching where one can get Empanadas in Latin America, the word “everywhere” sums it up. The folded pastry can be filled with a variety of ingredients, varying from one Latin American country to another. The dish can be served as a starter or as the main course altogether. Argentina often fills its Empanadas with beef or chicken seasoned with spices. Other interesting fillings include boiled egg, olives, or raisins. Empanadas are considered a symbolic food in Chile and are commonly enjoyed with red wine. 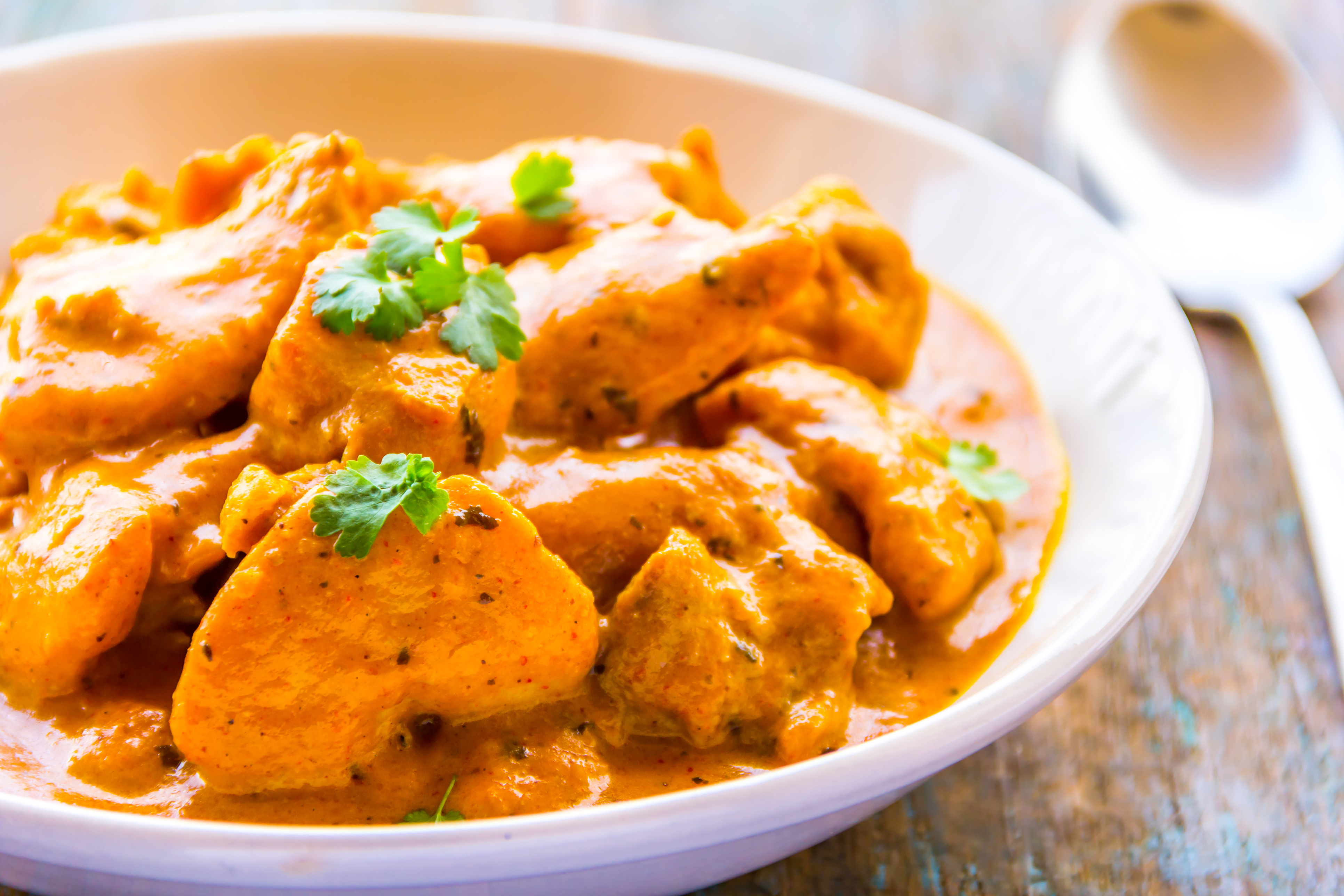 The recipe for Butter Chicken was unintentionally concocted by three cooks using leftover marinade to soak the chicken.

Butter Chicken is a savory dish that is very popular in South India. As the region’s staple dish, it won’t be difficult to find it on any one’s menu. However, if you’re overwhelmed by the task of choosing where to have your authentic Butter Chicken meal, we suggest heading to the restaurant where it all started.

In 1950s Delhi, three cooks working at their restaurant called Moti Mahal “accidently” created Butter Chicken by stewing a chicken cooked in their tandoor oven with a mix of marinades left over from other dishes, along with the addition of tomato and butter. It didn’t take long for Butter Chicken, or Murgh Makhani as it is known in Hindi, to become a popular menu item.

Today, there are more than 150 Moti Mahal restaurants in India. All are reputable when it comes to their Butter Chicken recipe, but head to the one in South Delhi if you want the historical significance of tasting it where it was first conceived. 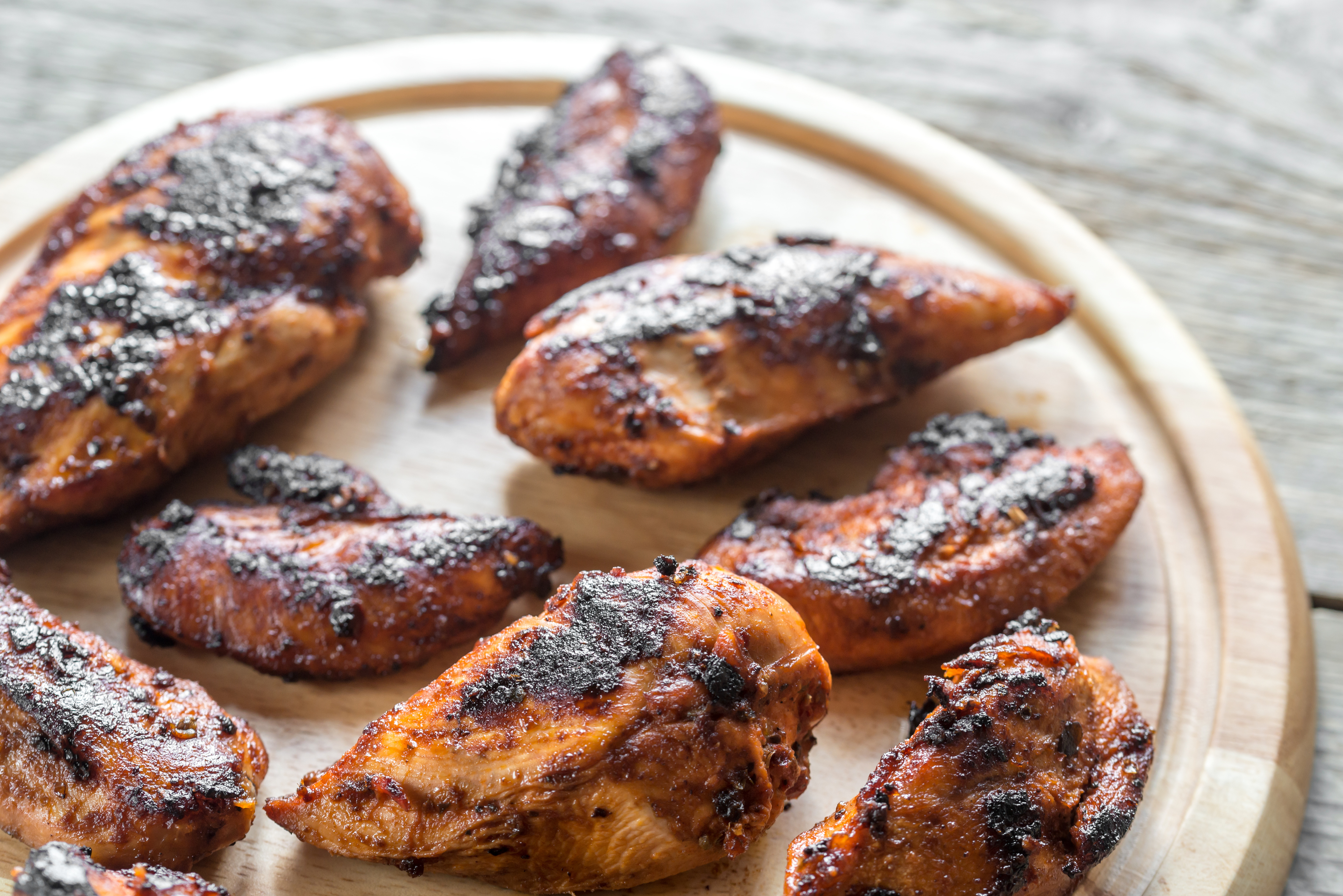 The distinct characteristic that separates Filipino Adobo dishes from others is vinegar.

Rather than referring to the food itself, “Adobo” refers to the cooking style used to make these salty dishes. The Adobo method involves stewing vegetables, chicken, pork, or seafood in a vinegar marinade. Although similar Adobo dishes exist in Spain and Latin America, the Filipino dish differs by containing ingredients native to Asia in addition to rice, cane, or coconut vinegar. Soy sauce, black peppercorn, and bay leaves are mixed with the vinegar marinade before meat and vegetables are added. The heavy use of vinegar in early recipes contributed to taste and help the food last longer in the Philippines’ tropical climate.

Adobo Chicken and Adobo Pork are the most common variations of the Adobo collection. It is served as a main dish on a bed of rice. Because it is easy to prepare, Adobo Chicken can be enjoyed at home or at a restaurant.

Hungry yet? Call Jaya Travel to get the lowest airfare to these destinations so you have plenty of funds left to chow down. Call today!