For centuries, Icelander’s took the simple act of bathing to a whole new level. Geothermal hot springs are common in the country, and it didn’t take Viking pioneers long to discover how relaxing soaking in nature’s bathwater could be. Then in ‘80s, one person’s journey for a skin treatment led to the creation of Iceland’s most popular tourist attraction. For today’s Monday Motivation, we show you why Iceland’s Blue Lagoon should make your travel Bucket List.

History of the Blue Lagoon

Iceland is one of the most geologically active places in the world. From volcanoes to hot springs, there’s so much excess heat that the country is actually able to produce 100% of their electricity from renewable resources, mainly geothermal. In the 1980s, the hot water run-off from such a geothermic power plant drew the very first visitor to the lagoon.

As the water was heated for the power plant, it flowed into a manmade lagoon to return to the environment. There were no tourists at this time, but one man sought permission to bathe in the waters because he hoped the naturally occurring minerals would soothe his psoriasis. At first, the powers that be were skeptical, but eventually this man was granted permission. As it turns out, the mineral-rich waters worked wonders for his psoriasis.

It should be noted that although the water comes from a power plant, there are no chemicals whatsoever from the plant. Geothermal energy relies on the Earth’s own heat. Once the water has passed through the plant, it’s sent to the Blue Lagoon and then back into the environment. The water refreshes itself every 48 hours and, unlike nuclear power, there’s no chance of dangerous things like radiation contaminating the water.

A few years later in 1987, the first public bathing facility opened, though it still was aimed at those seeking medical relief. In 1999, the whole place was transformed into the modern facility you will find  today complete with showers, saunas, and even bars.

Why is the Blue Lagoon blue?

The water actually is a mixture of sea water and minerals from deep in the earth. The most abundant mineral is silica, which is great for your skin.  You can actually find a silica mud mask bar within the lagoon. Grab a handful of warm white mud, rub it on your face, leave it for 10 minutes, and rinse. Your skin will look better than ever!

Because of all these minerals, and the water retaining a lovely 102 degree Fahrenheit (39 degrees Celsius) temperature year-round, a naturally occurring algae thrives within the waters. It’s these critters that give the lagoon its characteristic blue hue. (By the way, don’t worry. It’s not the same algae you might see in an uncleaned, backyard pool.) When you visit the gift shop, you’ll have the chance to purchase an algae mask along with silica mud to take home. 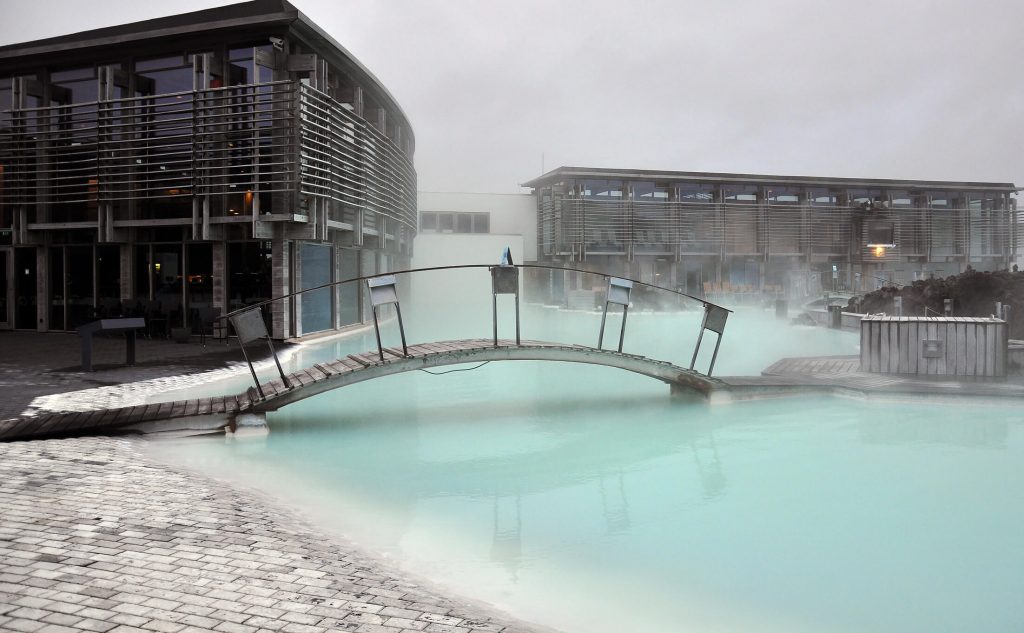 A unique species of algae give the seawater of the Blue Lagoon its characteristic milky blue hue.

Where is the Blue Lagoon?

Iceland’s Blue Lagoon is only about 15 minutes from Keflavik Airport and 30 minutes from Reykjavik by car. Even during brief stopovers, you’ll have plenty of time for an excursion. Be sure to book your entry ticket in advance. Because of its popularity, if you try to book the day of, you’ll likely find it’s sold out. Plus, prices are better the earlier you book it.

How to visit Blue Lagoon

There are different types of entrance tickets depending on what you’d like to do. The most basic ticket gains you entrance to the Blue Lagoon and allows the rental of a storage locker and towels, and it goes up from there. If you wish, you can opt for the most luxurious option. This includes a stay at the on-site hotel, several complimentary drinks from the bar, and plenty of relaxation time featuring saunas, massages, masks, and more.

The best timeslots are usually first thing in the morning or late in the evening. During the high season, the lagoon is open until midnight. These two timeslots are when you’ll see the least amount of people. Plus, if you like staying up late, you just might be fortunate enough to catch an aurora! 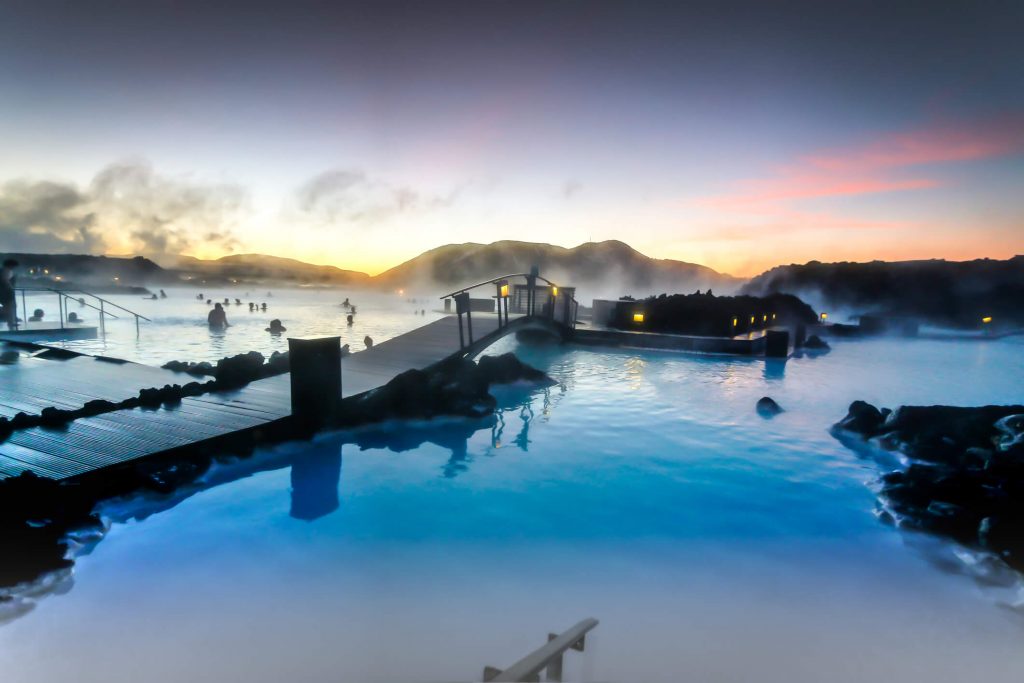 The Blue Lagoon is perfect for kicking back with a drink, enjoying the waters, and maybe catching the aurora!