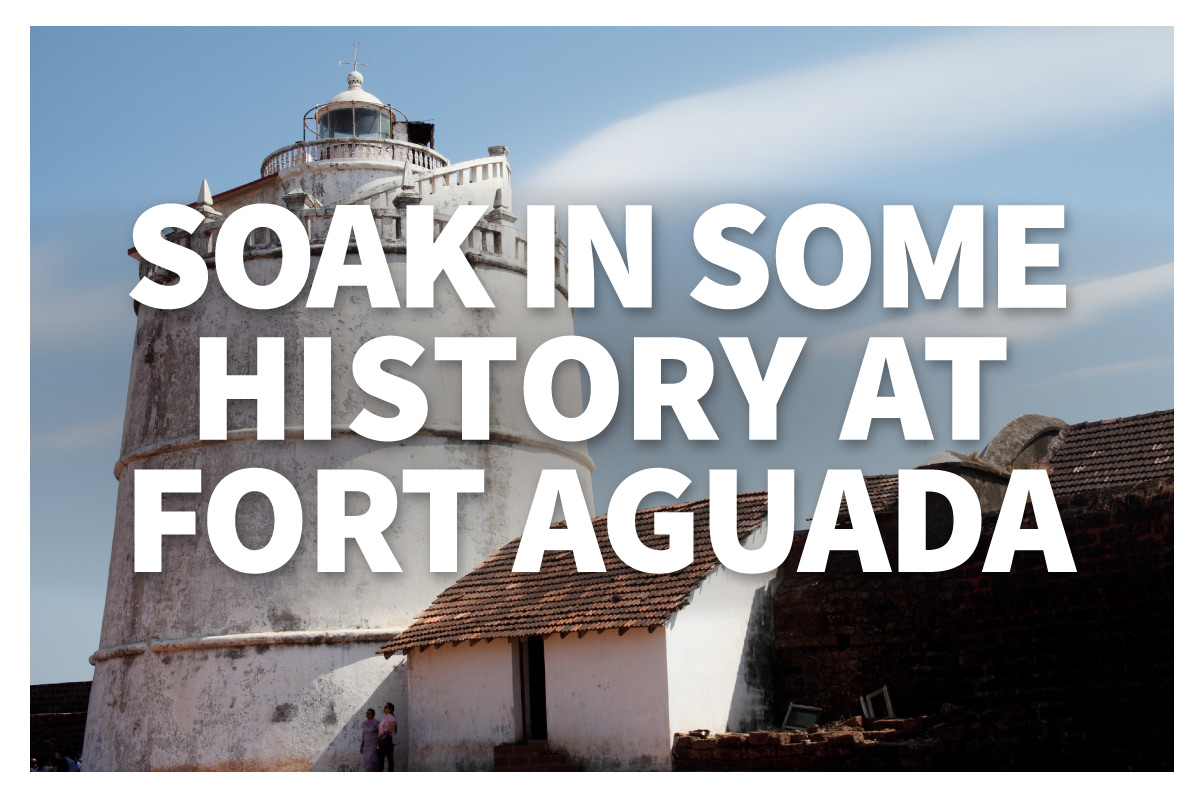 Happy Free Friday! This series focuses on fascinating and free sites to explore in every corner of the world. This week we’re featuring the beautiful and history-filled Fort Aguada in tropical Goa, India.

Fort Aguada sits on Sinquerim Beach, overlooking the confluence of the Mandovi River and Arabian Sea that it has guarded since its construction from 1609-1612. Although Aguada is no longer in its prime, it still holds centuries of history within its well-preserved walls and offers the same stunning views of the surrounding sea. The Portuguese built this fort to guard against the Dutch and Marathas and named it after the fresh water spring within its walls (Aguada means “watering place” in Portuguese). To capitalize on the fresh water source, they constructed an enormous cistern that could store over 2,000,000 gallons of water and became an invaluable resource for ships in need of renewed water supplies.

Its location was particularly critical during this time period, as control of the confluence of the Mandovi River and Arabian Sea meant control of the waterways in and out of Goa, the capital at the time. The structure took up the entire peninsula and provided the colonists a defensible position and safety. The Portuguese had many hostile neighbors and needed to ensure this strategic location was protected from enemies.

The fort is an inspiring example of Portuguese military architecture and engineering. Built for solidity rather than beauty, it was defended by thick walls, a dry moat, and a main gate that faced a steep drop to the Mandovi River. It had two main levels. The bottom sea level contained storage rooms, prisons, living quarters, a chapel, and safe docks for ships. Its upper level was all about defense, with mounted cannons, iron doors, and the all-important water cistern. It also featured secret passageways and could wield up to 200 canons.

Today Fort Aguada’s most eye-catching feature is the four-story lighthouse that was added on in 1864. Originally all the lighthouse had was a crude oil lamp that emitted light every seven minutes, but it gradually upgraded to newer technology that emitted light every 30 seconds. It was actively used until 1976, when a newer and more conveniently located lighthouse was built. Despite some wear and tear over the years, it still dominates the landscape of the fort and holds the distinction of being the oldest lighthouse in Asia!

Although the fort is no longer the military structure it was four hundred years ago, it has withstood the rigors of time and is the best preserved Portuguese fort in India today. Plus it offers some truly remarkable panoramic views of the sea! With a cool sea breeze in a place so alive with history, it’s easy to imagine a Portuguese ship on the horizon, heading toward the fort in search of safety and supplies. You’ll also want to visit Sinquerim Beach next to the fort, which is well maintained and great for water sports or just relaxing in the sand.

Sections of this massive complex have gradually been repurposed over the years. A portion of the fort is now a prison (and as such is obviously not open to the general public). Another part of the fort has become the Taj Fort Aguada Resort & Spa, which movie fans might recognize as the backdrop of several well-known Bollywood films. However, even though this formidable fortress has seen many changes since its construction four centuries ago, visitors continue to appreciate its vivid history in the impressive remains.

To get to the fort, visitors can either travel by vehicle down the long road from Sinquerim beach or take a shorter foot path (but be prepared for a steep climb!).