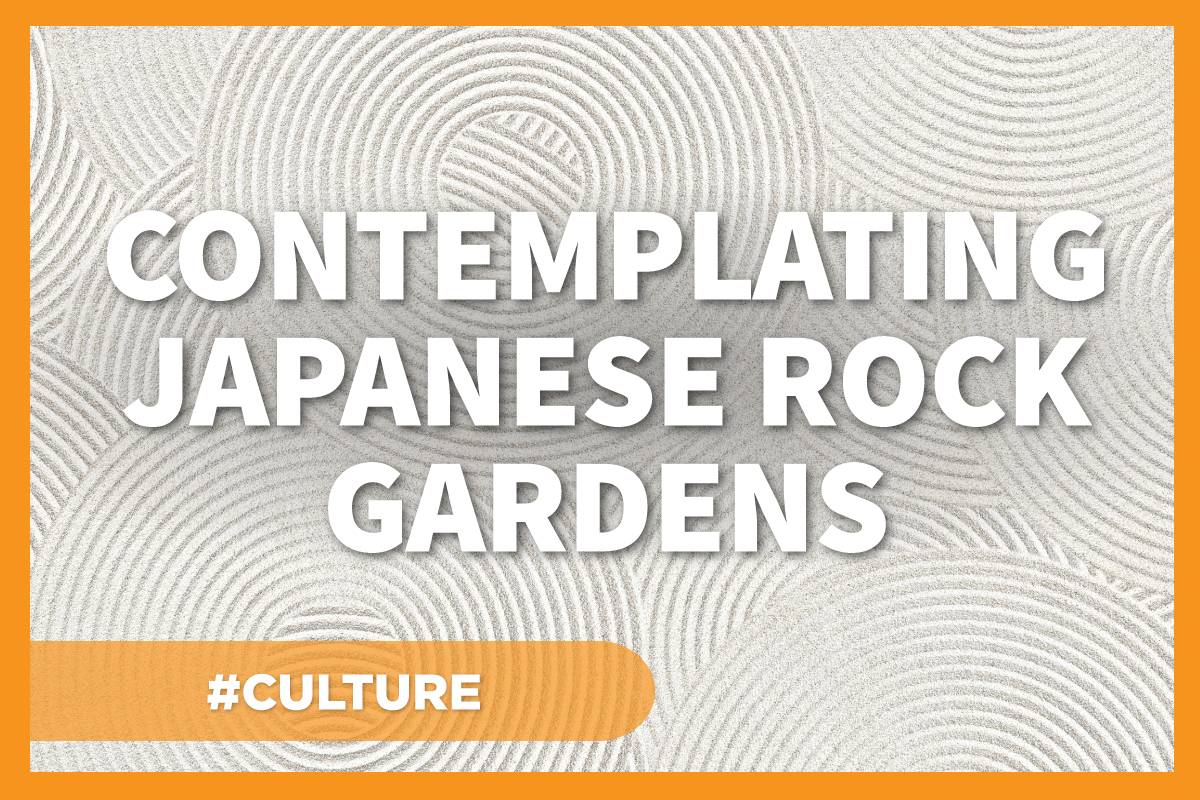 For centuries, Japan has been home to one of the most peaceful, aesthetically pleasing traditions in the world: rock gardens. For today’s new segment on culture, we explore the history and meaning behind these fascinating places and highlight some of the most popular. Join us as we delve into the ancient practice of rock gardens in Japan.

The Japanese word for rock gardens is “karesansui” which translates to “dry landscape garden.” Also called “zen gardens,” these miniature landscapes have been a part of Japan’s Shinto traditions for centuries. While gardens have different forms, the common thread between them is the use of gravel or sand to represent water and waves. Some gardens do in fact have ponds and other real water sources, but generally speaking the “waves” are recreated using a special rake and combing the sand just so. The sand is also used to represent emptiness and distance – similar to the white space one would find in traditional Japanese painting. Rocks are used to represent both real and imagined geographic locations. Moss, grass, and other foliage may be used as well.

Rock gardening as it is known in Japan today existed as early as the Heian Period (794 – 1185 CE). These first gardens were inspired by the Chinese gardens of the Song Dynasty. Later, during the Muromachi Period, there was a flourishing of Japanese culture that paralleled the Renaissance in Western Europe.  It was around this time that Zen Buddhism crossed the sea and quickly enveloped into the pre-existing Shinto religion. The new zen influence affected the rock gardens of the day as well.

Whereas previously gardens were a purely aesthetic feature of a temple, during the Muromachi Period, they increasingly became a catalyst for meditation. Their function was not only to provide something pleasant to look at but also to inspire meditation with their simplistic designs. Often, gardens are arranged so that one must sit or stand on the steps of the temple in order to view it as the artist intended.

Many of Japan’s rock gardens are located in or near Kyoto. Here are four you won’t want to miss. 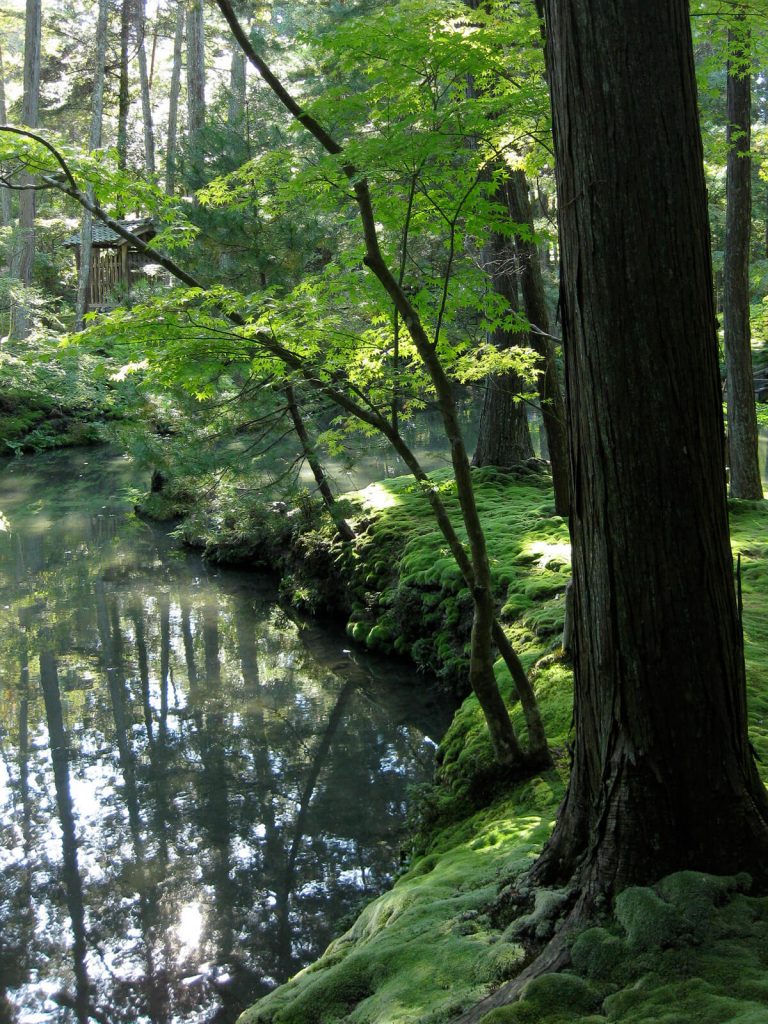 Saiho-ji is famous for its many varieties of moss.

This garden’s claim to fame is the moss that flourishes amongst the trees and rocks. In fact, over 120 types of the fuzzy green covering grow here. Saiho-ji’s garden may not appear as orderly as others, but it was originally constructed in the 8th century CE. One must admire the dedication of generations of monks who maintain the grounds. In addition to the characteristic moss, the garden is home to Golden Pond, three islands, and three tea houses. Should you choose to visit, be prepared to perform a task before you’re granted access to the garden. Visitors may be asked to meditate, copy sutras by hand, or chant for a short time before they are allowed in. The peaceful atmosphere inside is certainly worth it!

The meaning of this garden’s design has unfortunately been lost to history. Modern historians believe it is meant to be an imaginary, abstract landscape. Fifteen large stones are the characteristic features of the garden. It’s interesting to note that at no place in the garden can one view all the stones at the same time. However, the best place to view the garden is seated on the temple steps, quietly contemplating their meaning. Due to the popularity of this rock garden, it’s best to visit either first thing after opening or just before closing. 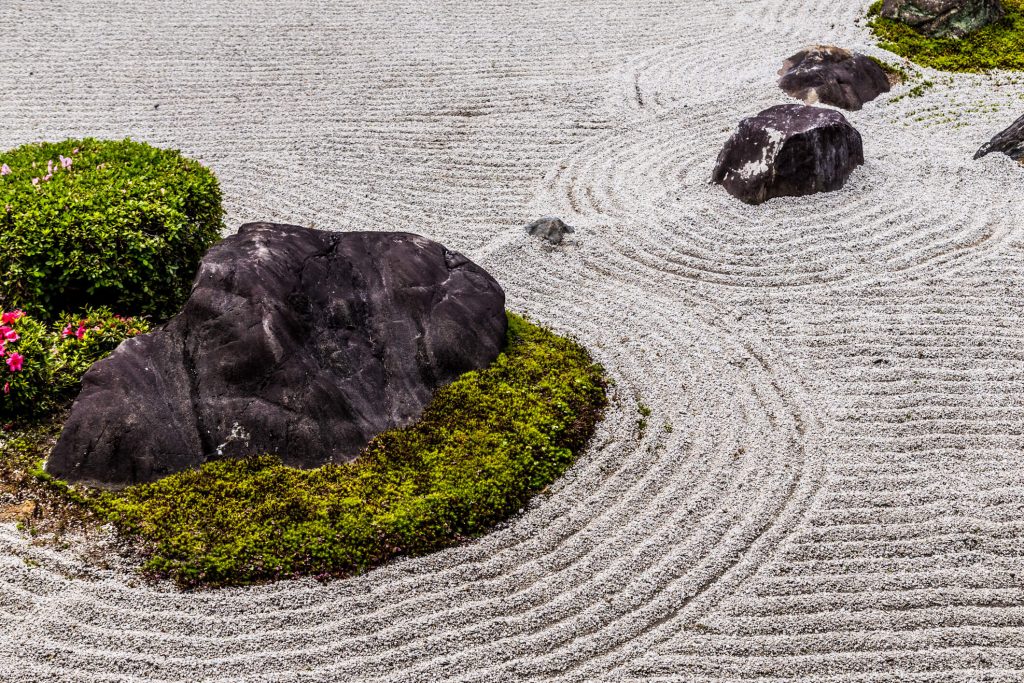 Visitors to Kyoto often come here for the more traditional aspects of Japanese culture. Kyoto is far from the modernity and bright lights of Tokyo. If this applies to you, Kennin-ji is an absolute must. Completed in 1202, it has the distinction of being the oldest temple in Kyoto. The rock garden is renowned for its white gravel and paintings of two dragons on the roof.

The garden here is known as “The Sea of Silver Sand” though it might be more appropriate to say “Mountain of Silver Sand.” This rock garden features one of the most unusual structures: a massive sand cone which is believed to represent Mount Fuji. (And yes, the sand is a beautiful shade of grayish silver.)

If you’d like to meditate in these rock gardens yourself, give us a call! We’ll create a custom tour specifically around Kyoto’s most famous gardens. You’ll feel like you’ve stepped into a painting. Get started here!