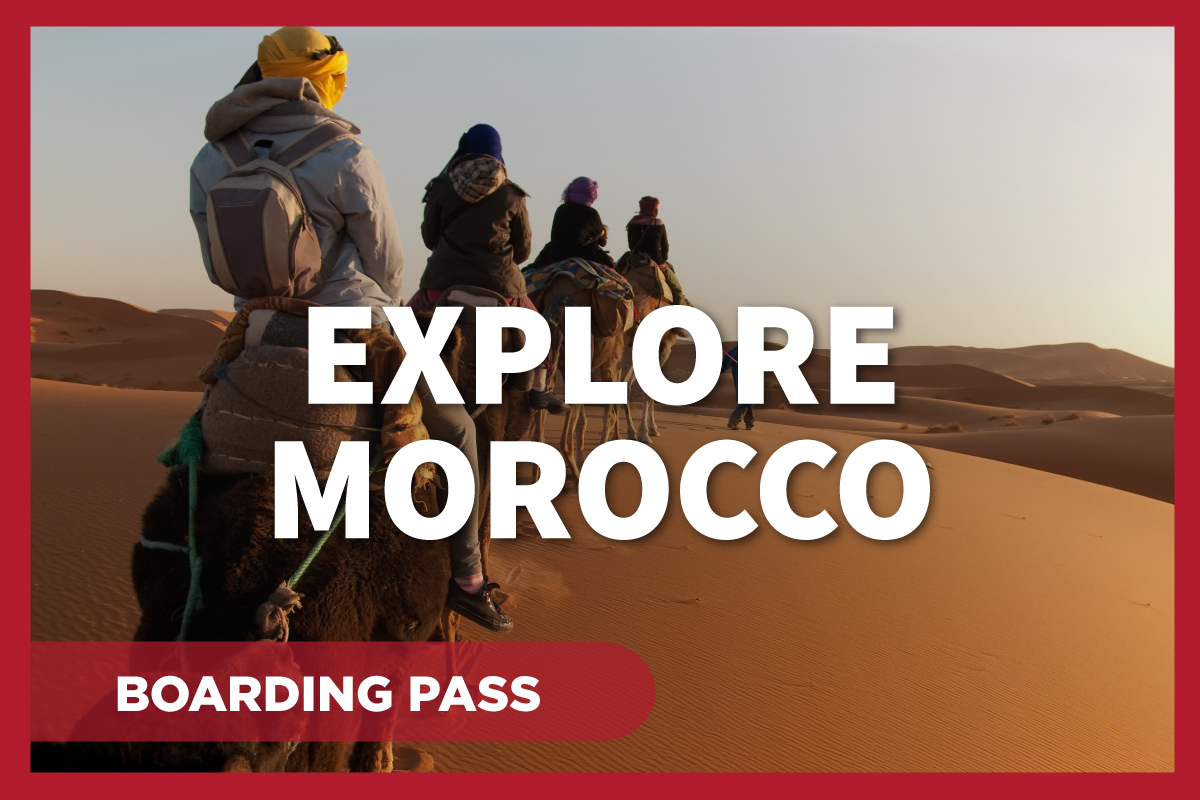 As the world slowly opens to travel again, we’ve opened our metaphorical suggestion box – stuffed with places both recommended and requested – to bring you the golden idea for your next vacation: Morocco.

Vibrant with color, diverse geography, and a unique culture resulting from its dynamic population and history, Morocco is where you’ll satisfy that craving for something different after a year bound to your home and routine. Take your first step into this enchanting country with these ideas when you finally arrive in Morocco, one of our Top 10 Destinations for 2021. 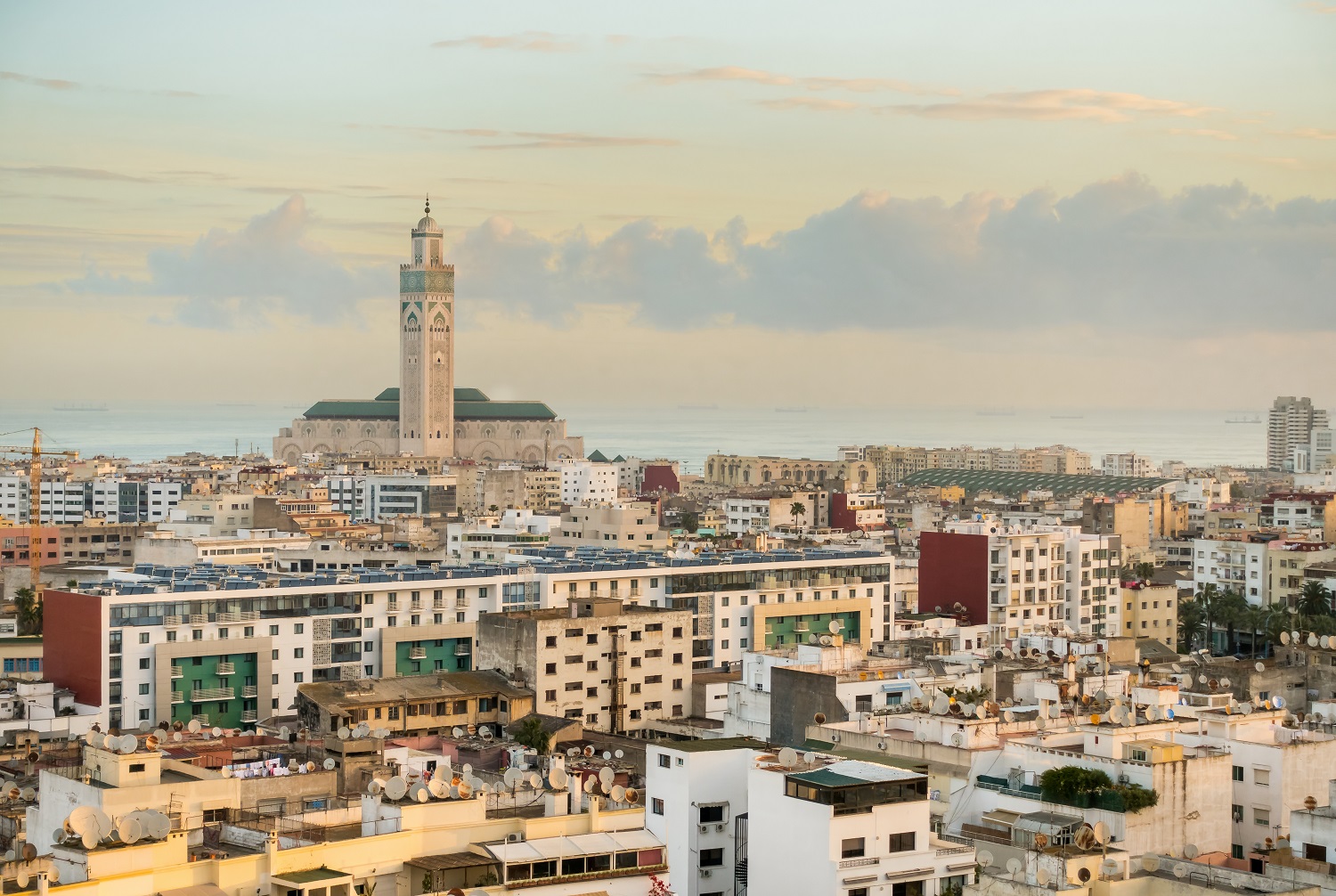 Home of Morocco’s main airport, Mohammed V International Airport (CMN), the grand city of Casablanca is where most travelers begin their Moroccan vacation.

Travelers don’t usually opt to stay in Casablanca for very long, heading to the cities of Marrakesh (to the south), Rabat (Morocco’s capital to the northeast), or Fes (east of Rabat). However, if you fancy a right-off-the-plane dose of Morocco’s famous architecture, make your way north from the airport toward the ocean to visit the Hassan II Mosque. Offered tours, in several languages, give the public a chance to see inside Africa’s second largest functioning mosque and admire the hand-crafted marble walls.

About four miles south of Hassan II Mosque is the Museum of Moroccan Judaism. This is the only Jewish museum in the Arab world, and is filled with ancient artifacts and items that honor Morocco’s Jewish history.

Morocco has four imperial cites, each of which has served as its capital at some point in time. If loving historic architecture is part of your travel personality, you have more than a few places in Morocco to choose from. Rather than overwhelm you with every inch of this historic country’s attractions, however, we’ve narrowed our list to these must-sees: 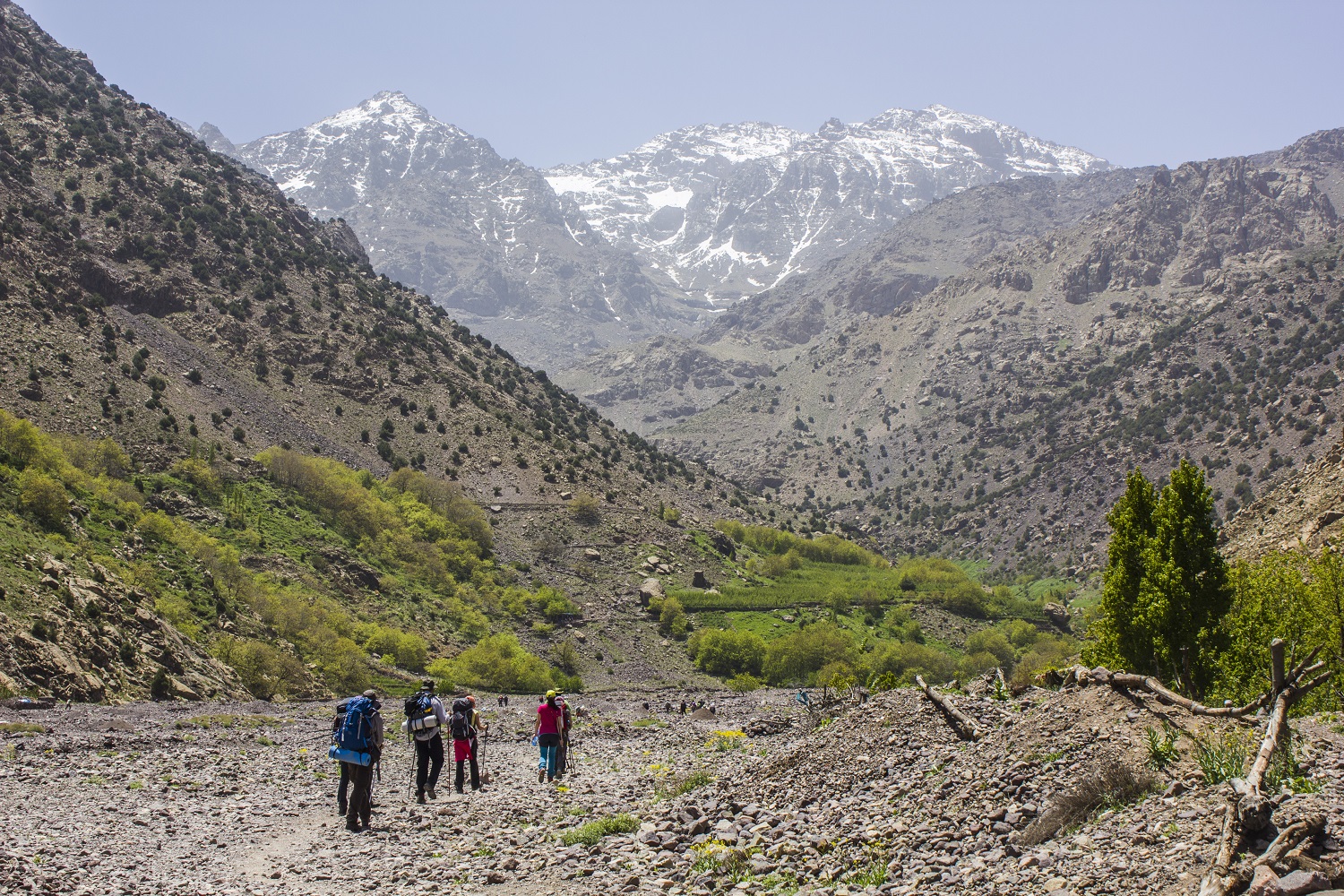 Blanketing 380 square kilometers (146.7 miles) of central Morocco is a dramatic shift in scenery as the landscape ascends to the Atlas Mountain range. Those seeking one-on-one time with nature and a pause from the heat at sea level find a well-stocked inventory of hiking trails here. 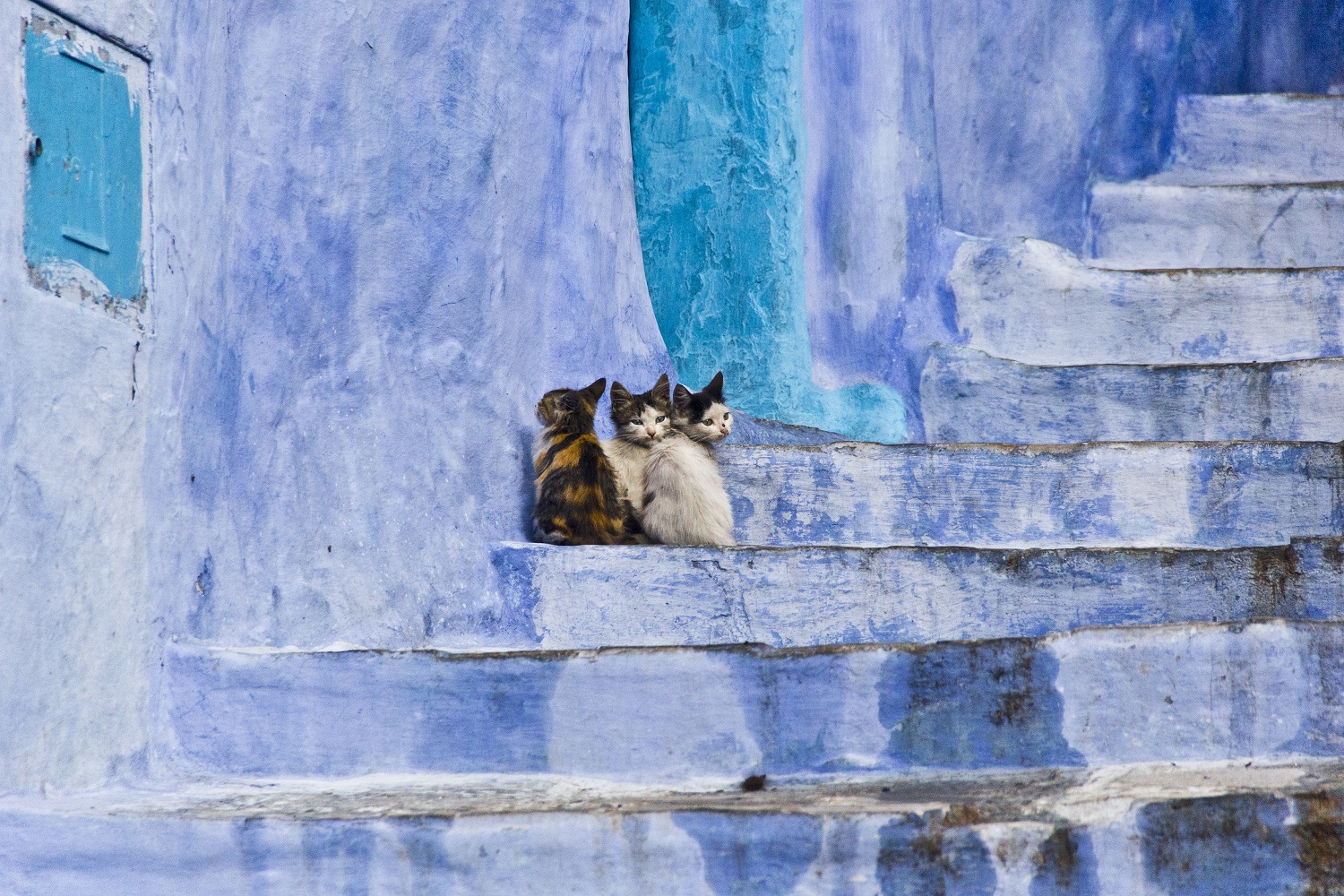 Less strenuous terrain and paths less traveled attract many backpackers and low-budget travelers to the Riff Mountains. Many trails offer easy trekking and unbeatable views of the Mediterranean Sea to the north.

At the base of the mountains is the city of Chefchaouen, known as Chaouen by the locals and recognized as the Blue City. There’s no metaphor as to why it’s called the Blue City. All of the buildings, huddled closely in the foothills, are painted a shade of blue, giving the city a look of fantasy. There are many theories why everything was painted blue and there are certainly many opportunities to get a local’s perspective while wandering through this friendly city.

A day trip to the Todra Gorge, located in the eastern High Atlas Mountains, exposes visitors to Morocco’s highest and narrowest canyons. Specifically, Todra Gorge refers to a 600-meter stretch of the canyons where the walls narrow their gap to only 10 meters (32 feet). Starting from the base town in Tinerhir, getting to the gorge is an easy day hike that also lends opportunity to light shopping at the pop-up shops along the canyons, rock climbing, and exploring deserted Kasbahs snuggled in the walls. Read more about the Todra Gorge here!

Partaking in desert adventure doesn’t come often in day-to-day life. Booking an excursion in the Sahara gives adventurous travelers a chance to check some things off their bucket lists with a variety of activities available through expert desert tour groups. Whether you choose to take in these stunning surroundings on camelback or shredding sand on a 4-wheeler, desert exploration is an experience unlike any other. And if you want to stay the night, exquisite desert camping trips are available and guaranteed to give you a view of the stars like you’ve never seen before.

The Beaches in Morocco 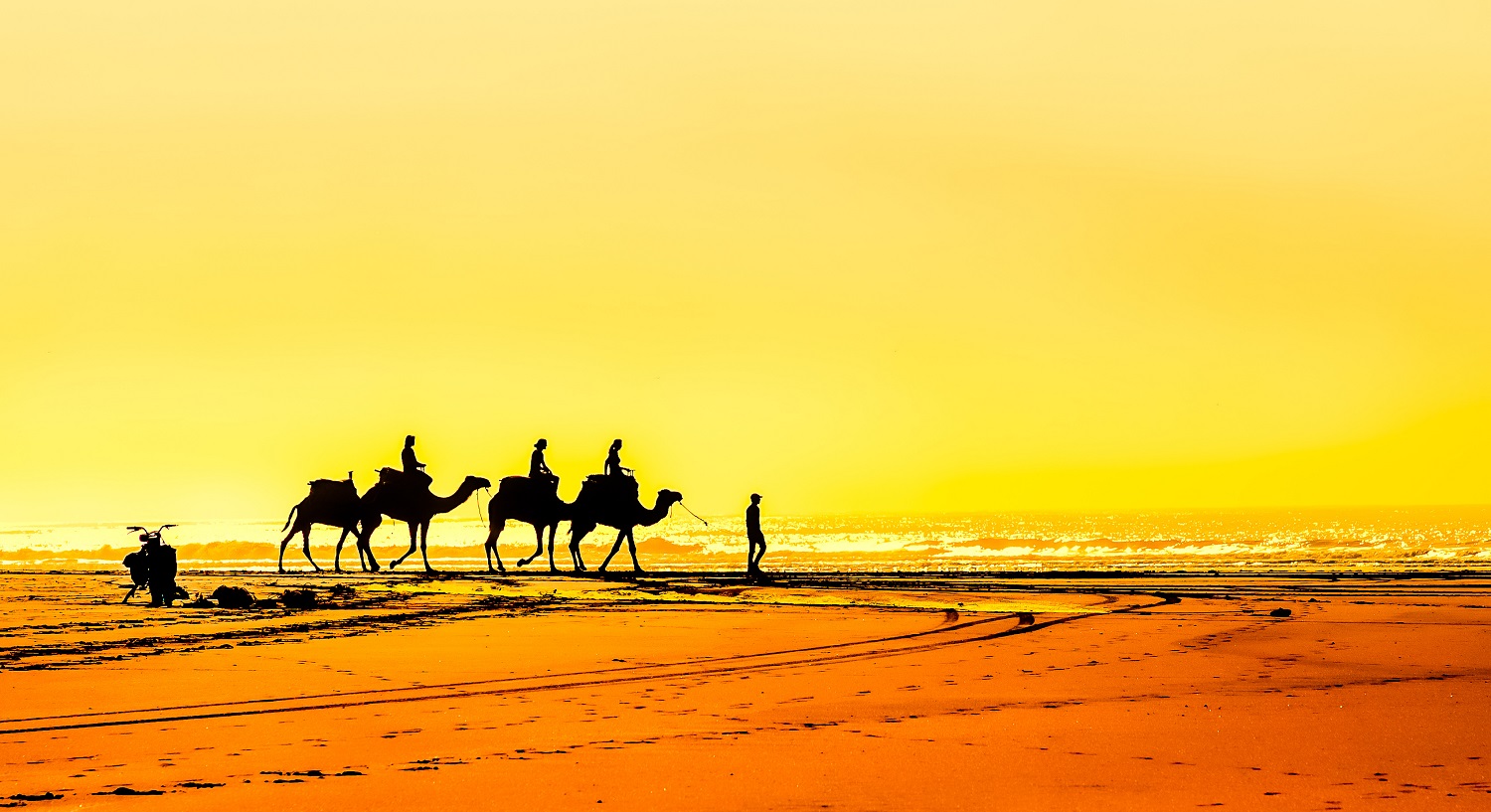 A country bordered by the Atlantic Ocean has to have some pretty good beaches, right? Of course it does! Perched near the northernmost point of Morocco is the city of Tangier. Miles of golden sand lace the east side of the city and serve as front row seats to magnificent sunsets over the Atlantic.

Rabat Old Market – Also known as Rabat Old Town, this area of the 12th century has evolved into a nirvana for travelers who want an authentic shopping experience in Morocco. This is where you find Berber carpets, overflowing buckets of by-the-bag spices, textiles, fashion pieces, antiques, and more. Visiting the various shops, restaurants, and cafés as you explore the town can easily take a whole day, and the bustling nightlife is worth staying up past your bedtime for.

Jemaa el-fnaa – The main public square in Marrakesh. Locals and tourists alike head to Jemaa el Fnaa to shop and haggle over souvenirs and other goods. Booths vending Moroccan street food are peppered throughout, and it is said visiting at night gives way to an entirely different color palette. Go in the evening to witness a breathtaking sight as the sun sets behind the nearby Koutoubia Mosque.

Chefchaouen (Chaouen) – Circling back to the Blue City located at the base of the Riff Mountains, Chefchaouen is said to have the best bargains when it comes to shopping. The city is also known for its delicious goat cheese, wool garments, and woven blankets.

Choosing Morocco for your return to travel guarantees a surfeit of new experiences, sights, and opportunities to drench yourself in the countries unique traditions. Create a trip that covers everything you want to do and see, at the best price, with expert help from Jaya Travel & Tours. Or check out our small group package for an 8-day pre-planned tour.