Boarding Pass: 5 Things to Do in Goa 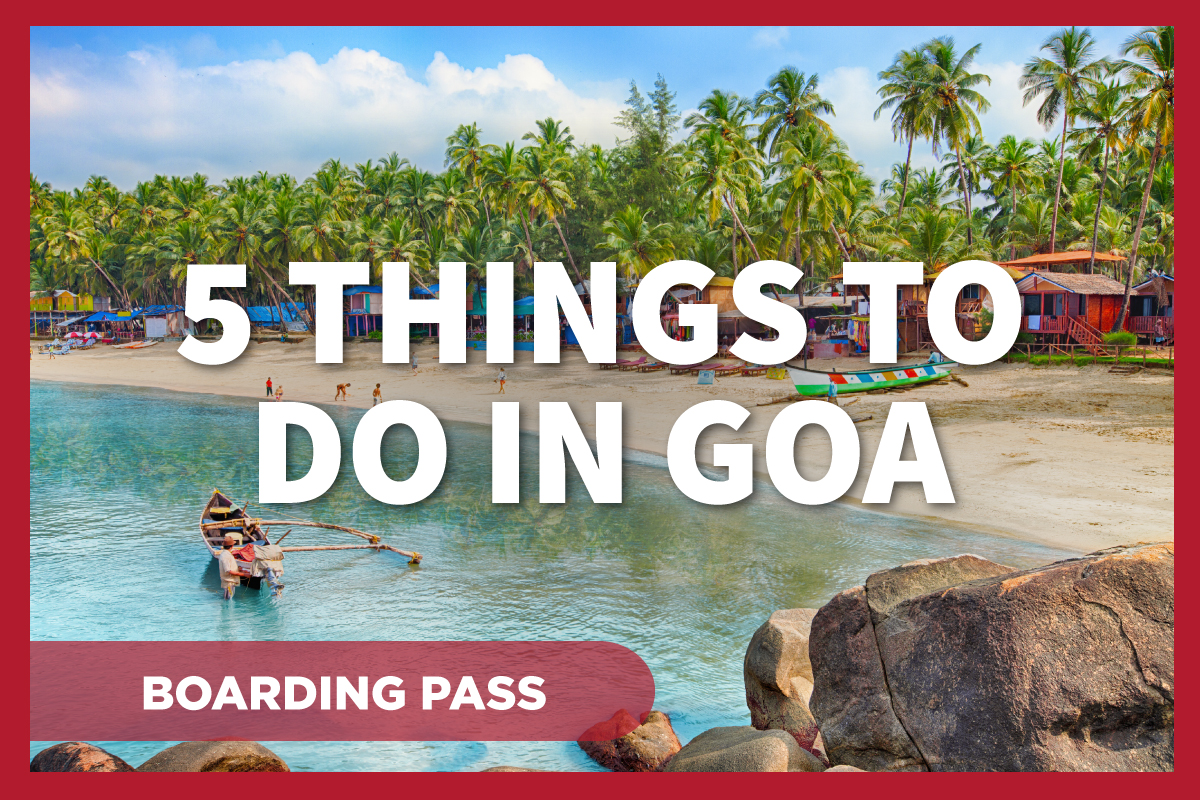 Goa’s western border is lined by the stunning blue waters of the Arabian Sea. If your itinerary consists of nothing but witnessing the best sunsets you’ve ever seen, Goa’s evenings alone will fulfill your trip. If you’re looking for other things to do while you’re here (or while waiting for the next sunset), read on! 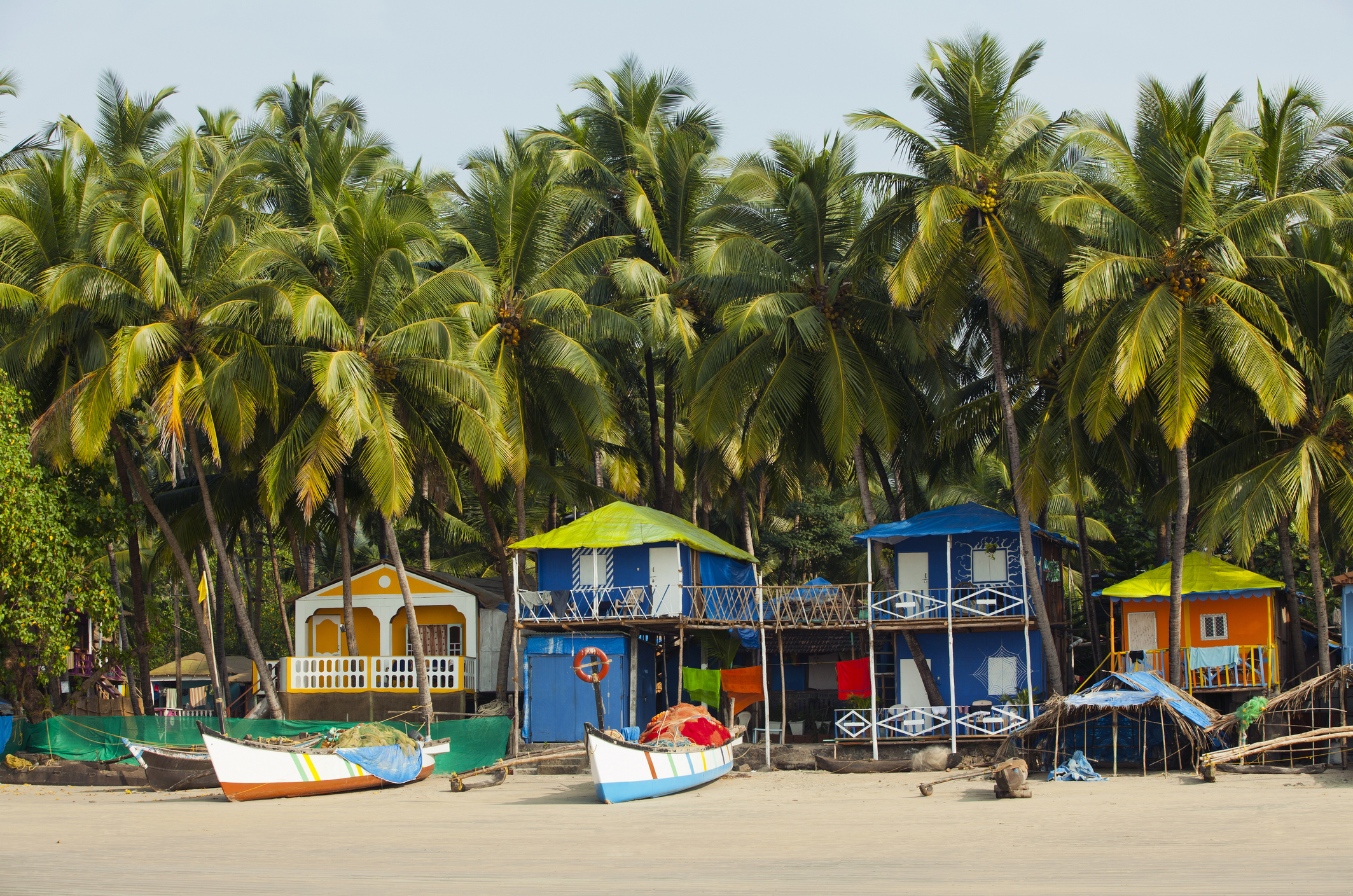 With a 160-kilometer (99 miles) coastline of golden sand backed by lush tropical surroundings that belong on a “Greetings from Paradise” postcard, Goa’s beaches are easily its main attraction. Palolem Beach is applauded as India’s most beautiful bay and is very popular among locals and travelers. Layers of turquoise sea, vanilla sand, rainbow beach huts, and Kelly green palm trees are real-life characteristics of this dream oasis. Hangouts ranging from cafés to lodges to quieter escapes pepper the walkable area, and the dumbfounding Magic Rock is a short walk up Palolem Down Street.

Whether you head northeast or southwest along Palolem’s shores, you’ll encounter one beach after the next. Agonda Beach (north of Palolem) offers slightly more solitude than Palolem and Betul Beach, found further north, is a small peninsula lined by the Arabian Sea on one side and the Sal River on the other. Southward from Palolem are Colomb Beach, a cove sheltered by cliffs on each side, and Patnem Beach, Palolem’s more chill-friendly counterpart, is about 1.5 kilometers from Colomb. 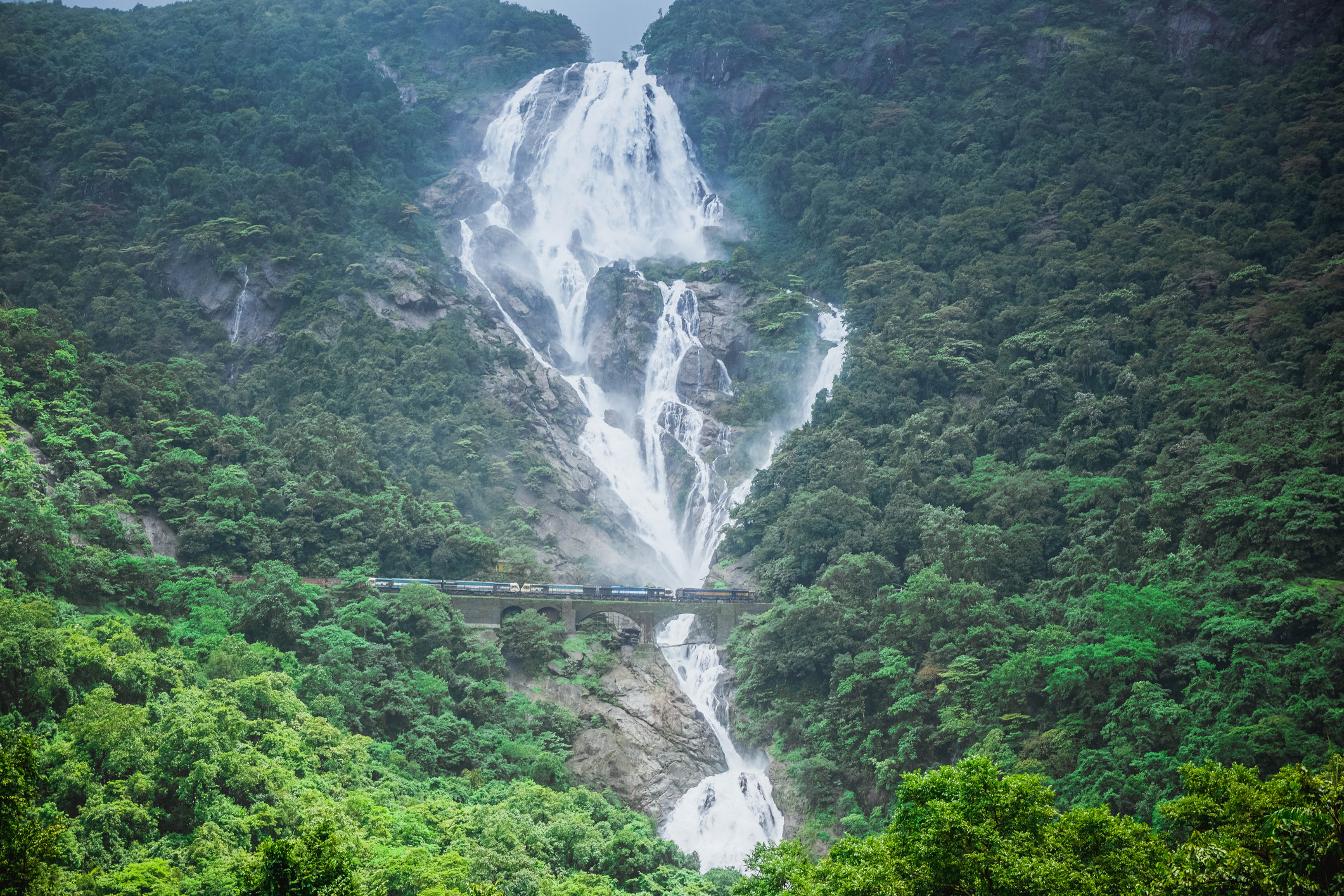 Dudhsgar Falls is an incredible site. Its milky white waters cascade over four tiers of rock.

Among the awe-inspiring wonders you’ll see when visiting Bhagwan Mahaveer Wildlife Sanctuary and Mollem National Park, Dudhsagar Falls is a spectacle. Powerful waters cascade over levels of rocky tiers piled 310 meters (1,017 feet) high. Its name means “Sea of Milk” because of the white color of the rapidly running water plunging down the cliff. You can reach the falls by train, taxi, or trek along the Dudhsagar Waterfalls Trail. Using the Jungle Café in the little town of Kulem as a launching point, it’s about 9.5 kilometers (6 miles) to the base of the falls. There, you can cool off with a swim or just stand star struck as you witness this jaw-dropping natural masterpiece.

Although it’s safe to swim in the calm lake at Dudhsagar Fall’s swimming site, it is not safe to drink the water. Bring a full water bottle when you head to the falls because there are no chances for refills until you return to the Jungle Café for a revitalizing lunch or a refreshing beer. It’s also worth alerting you to watch out for leaping monkeys. 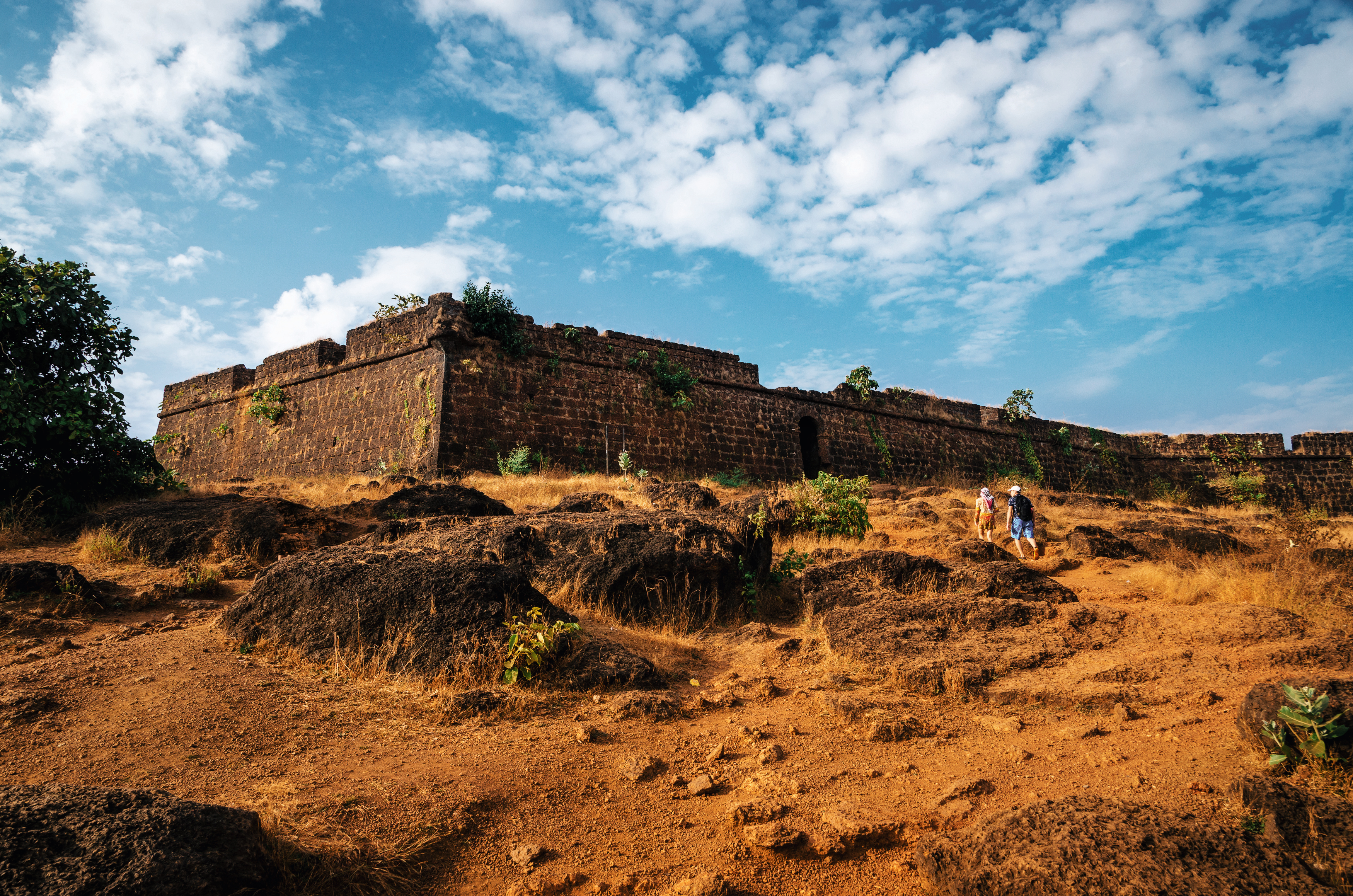 Chapora Fort’s standing structures have been traced to the 18th century.

The plateau atop a rocky cliff looking out to the Arabian Sea has been active since the 16th century. The remnants you see here today, however, are left from the most current fort constructed in 1717. Proof of its past is found in wall remains and its position that gives direct views of each waterway an enemy could approach (i.e. Arabian Sea and Chapora River) from. Entrance to the fort is free, and it gives you an excellent panoramic view of Goa’s Chapora neighborhood below.

Chapora’s atmosphere is mellow and bohemian, reflecting the hippie lifestyle soaked in Goa’s culture. Places like Hippie’s Shack, Chapora Fish Market, Siddeshwar Temple, and scads of beaches surround the fort. The best way to explore is go where your interests take you. 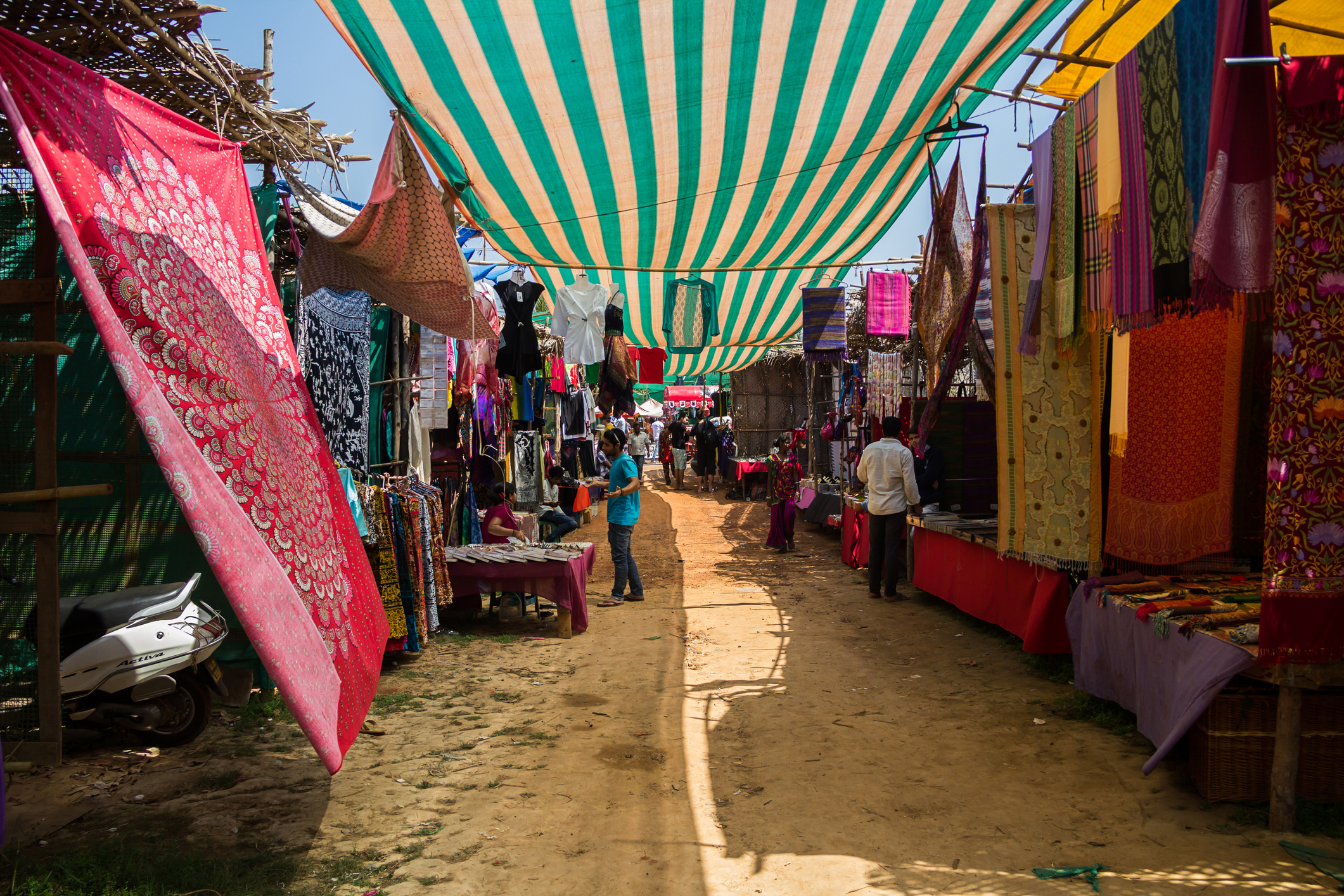 Anjuna Flea Market is open every Wednesday from morning until dusk.

Three miles south of Chapora Fort, nearing the lip of a rock cliff barrier is Anjuna Flea Market. There are many places to shop in Goa, but Anjuna Flea Market is a staple and a community treasure. The flea market is open every Wednesday, from morning to evening, and packed with finds from all over the country. Jewelry, clothing, antiques, Earthen Masks, and miscellaneous bargains fill rows of tarp-covered booths and the vendors are more than happy to haggle over the right price.

The market’s booths are clumped among palm trees, and its beach at the west end is the perfect spot to rest during your shop ‘til you drop excursion. Spend the afternoon shopping, then wind down with one of Goa’s signature sunsets at closing time. 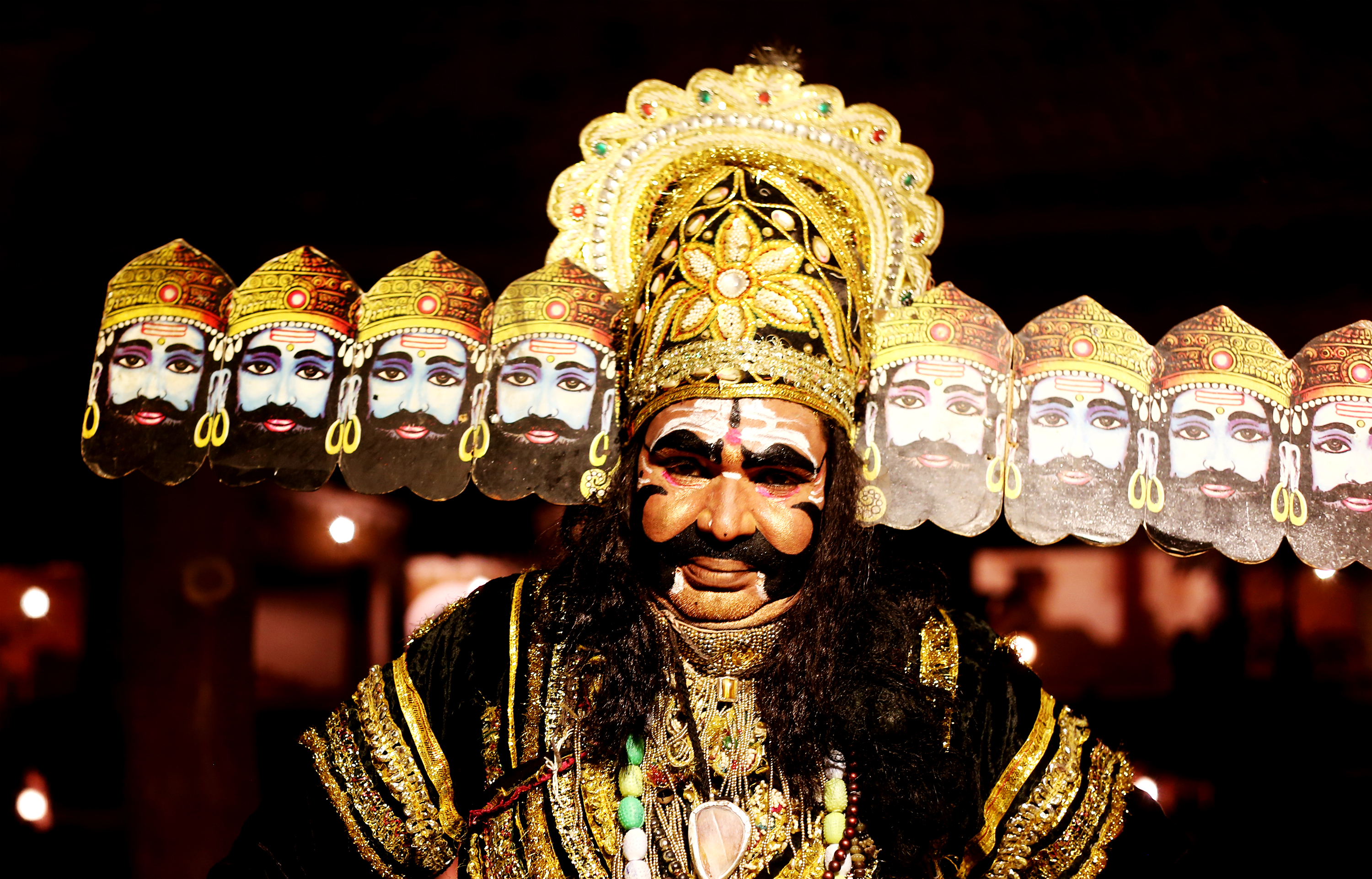 Tiatr is Goa’s brand of musical theatre that has earned status as the “Broadway of Goa“. Set around social, religious, and political themes, satire and comedy soften the performances. It’s okay to laugh! Tiatr is an art developed and performed by the Goan people, inspired by the harshly un-funny times of Portuguese suppression. Through these performances, Tiatr actors and audience members found ways to cope with their country’s tragedies. The dramas just happened to be so entertaining that the Goan people continued to perform them into present day.

Whether your Goa goals are at the beach, in the jungle, or at a Tiatr show, call Jaya to get details right. We’re driven to make your trip fit your style, and get you great airfare on the way. Let’s go to Goa!