5 Places to Try Bugs on Your Travels 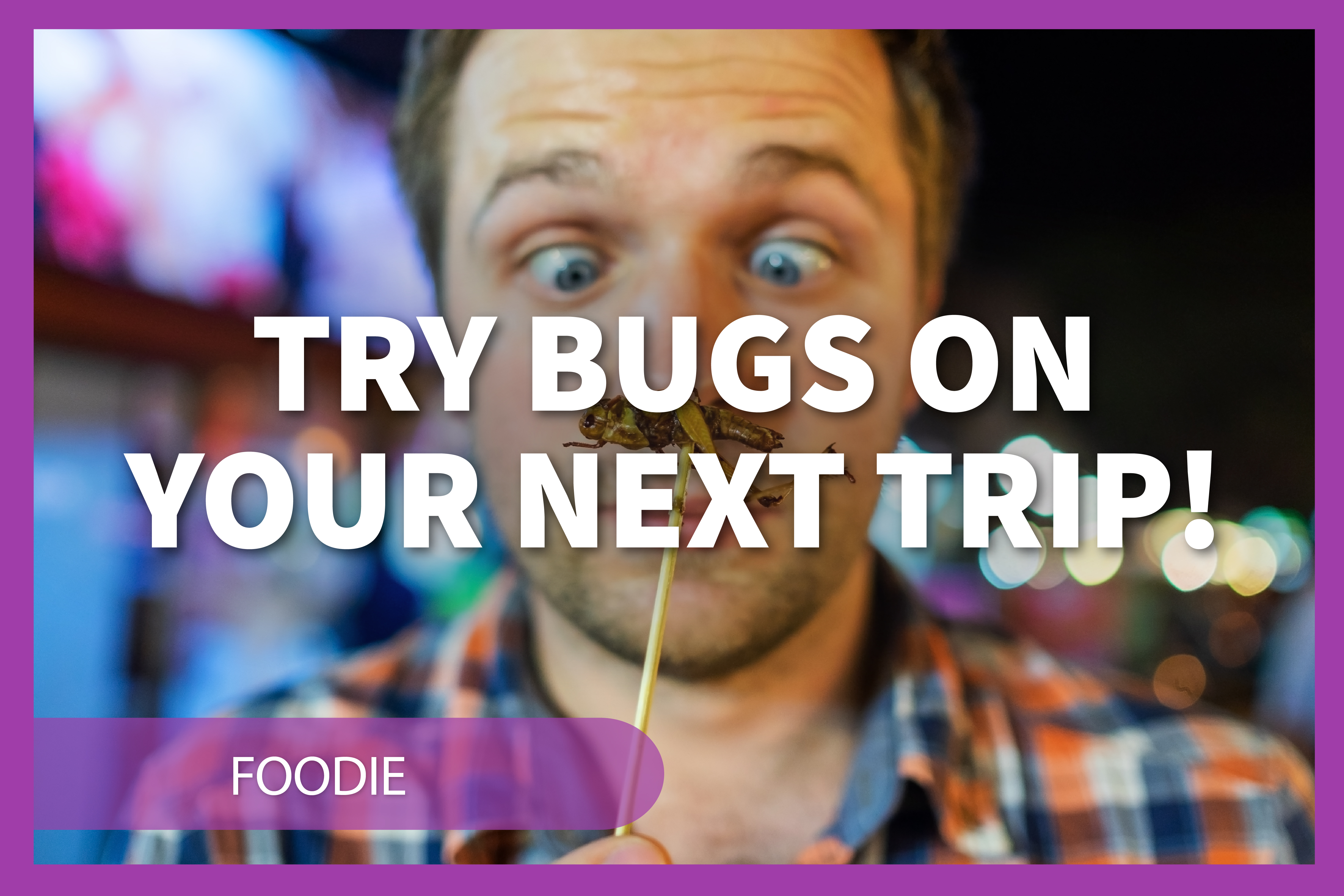 Disgusting or delicious? Around the world, many cultures don’t bat an eyelash when it comes to chowing down on creepy-crawlies. In the US, it’s still taboo, though the idea is catching on in some areas as a meat alternative. Maybe you’re a seasoned foodie (get it?) who wants a new challenge. Maybe you just want to see what all the fuss is about. In either case, if you’ve ever wanted to try bugs, here’s a list of five countries where insects are a culinary staple.

Bugs on the Menu 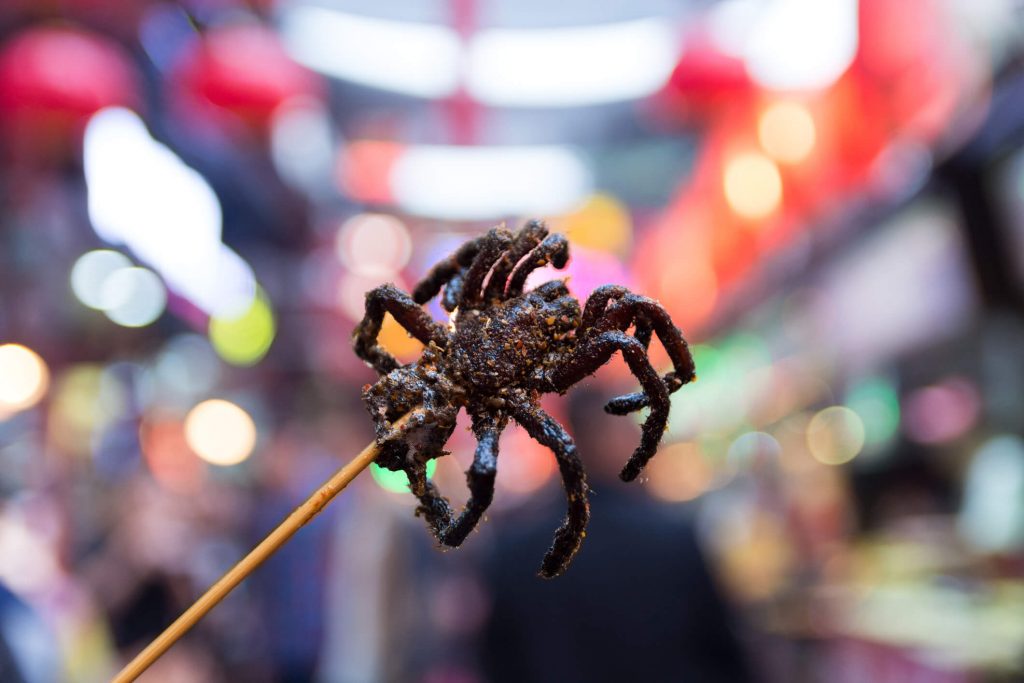 Deep-fried tarantulas are a Cambodian delicacy and cost about $1.00 US each.

This eight-legged delicacy is actually fairly new to the Cambodian menu. It’s a great, crunchy snack that was adopted out of necessity 40 years ago. During the reign of Khmer Rouge, many Cambodians were starving and turned to insects, like tarantulas, as a last means of nutrition. As it turns out, the bugs were quite tasty, and they’ve been a part of Cambodian cuisine ever since.

Technically, these little critters are caterpillars. They can be either a staple or a delicacy, depending on which part of the country you’re in. They’re harvested en masse, after which workers squeeze out the inners into gooey piles on the ground. The remaining tissue can be prepared in a variety of ways including smoking, frying, drying, or even pickling. Mopane worms pack a ton of protein and, being native to the region, are less harmful to the environment than raising cattle. Locals eat them by the cupful at local markets as you might eat popcorn – keep an eye out when visiting the shops! 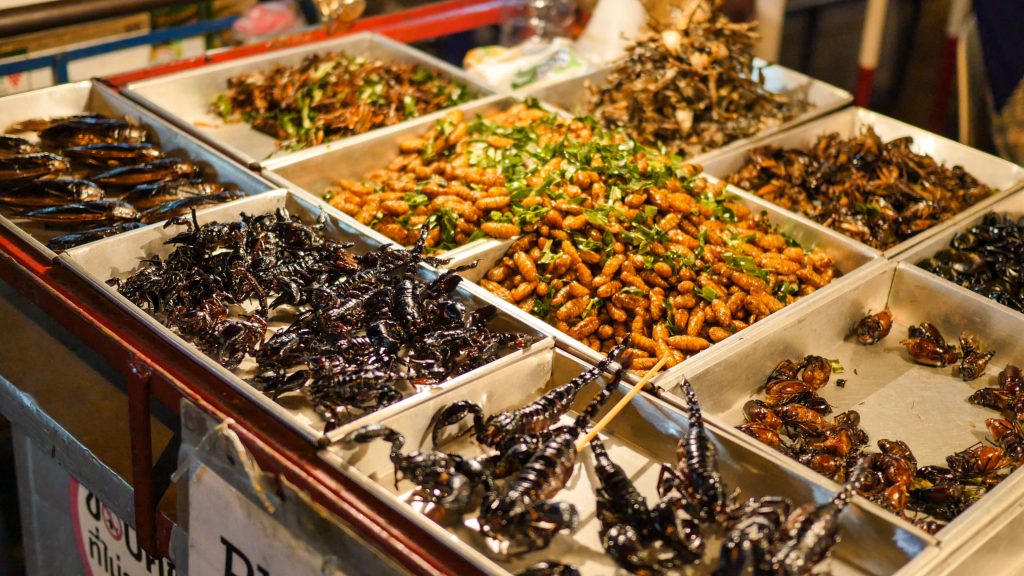 Bugs are a common streetfood in Thailand. Are you brave enough to try scorpion?

Street food vendors are chockfull of these hopping delicacies. Most commonly, you’ll find them fried in soy sauce and skewered on shishkabob sticks. While they appear similar on the outside, they each have a distinct flavor. Crickets are actually quite chewy on the inside, which is perfect if you like a snack you can savor for a while.  On the other hand, if you prefer crunchier snacks, stick with grasshoppers.

We all know termites are a pain in the rear. However, during the dry season, many rural parts of Ghana rely on termites as a staple. They can be roasted or pounded into a flour that is then baked into bread. Maybe these “pests” aren’t really so bad after all!

Mescal is a smoky liquor made from agave plants and often is mistaken for tequila. (Quick side note: tequila is made exclusively from blue agave.) Several worm species native to the Oaxaca region, where mescal is produced, are thought to make the beverage more flavorful. If you want to try a bug, but feel apprehensive, a quick slurp of a worm with some smoky liquor may be the easiest way to dip your toe in the proverbial pool.

Ready to order a side of crickets? Call Jaya! We’ll arrange a custom culinary tour that exposes you to the most exotic cuisines in the world.